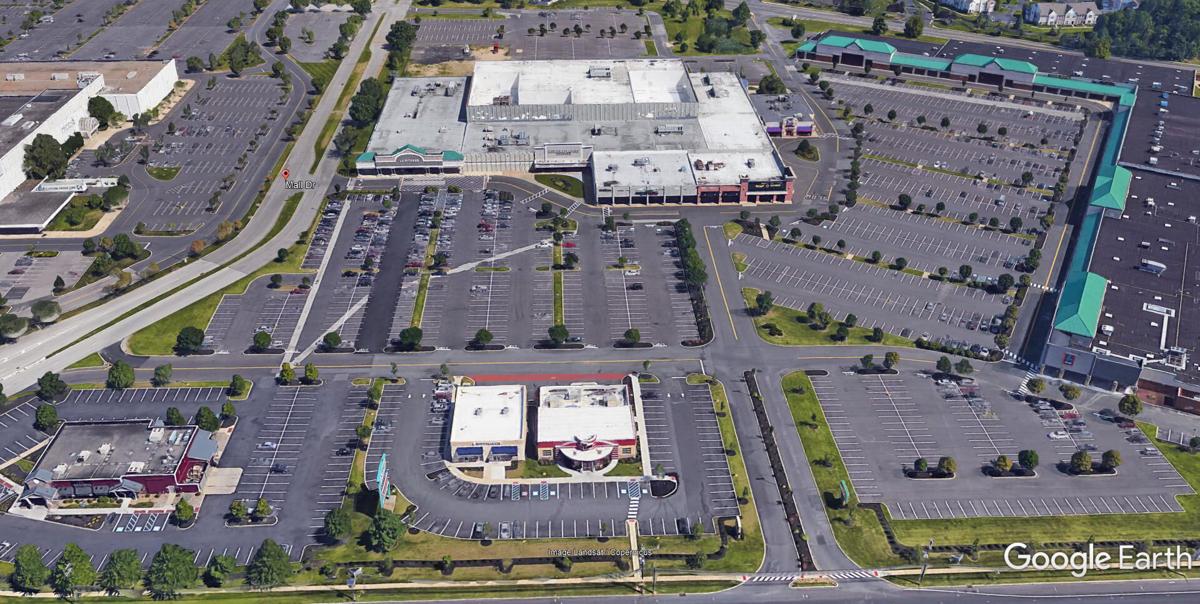 The large shopping plaza and outlying stores would be designated for rehabilitation and tax breaks. Route 38 is at the bottom of the photo and the Cherry Hill Mall is to the left. 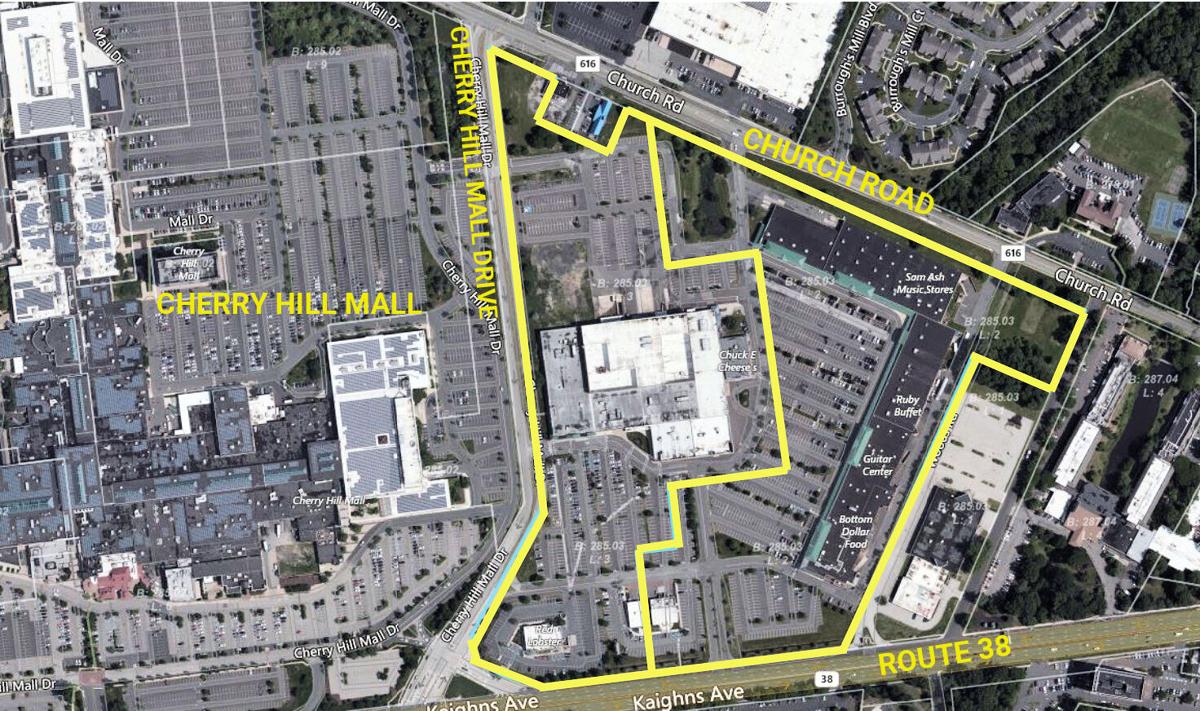 The two lots, outlined in yellow, with rehabilitation status and the eligibility for tax breaks on any improvements. Cherry Hill Mall is to the left. 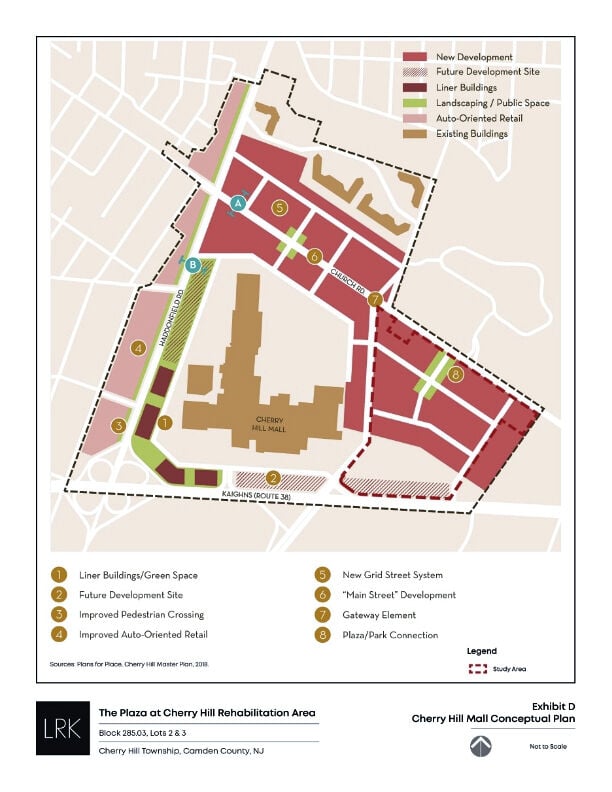 The large shopping plaza and outlying stores would be designated for rehabilitation and tax breaks. Route 38 is at the bottom of the photo and the Cherry Hill Mall is to the left.

The two lots, outlined in yellow, with rehabilitation status and the eligibility for tax breaks on any improvements. Cherry Hill Mall is to the left.

When the Plaza at Cherry Hill opened across from the Cherry Hill Mall, today's retirees were in high school and the hot new technology was the handheld calculator.

Since 1970, the huge shopping center between Route 38 and Church Road at Mall Drive has seen retailers come and go — recall Best catalog showroom and Gaudio's Garden Center — and the tired buildings on about 42 acres are in need of work so they don't look like they've reached the half-century mark.

It's a shopping complex that "has seen a dramatic change to its retail surroundings but has not experienced a transformation itself since its construction," according to a June report for Cherry Hill Township by architecture firm LRK Inc.

Cherry Hill Planning Board members on Monday night agreed: They voted 7-0 to recommend that Township Council officially designate the Plaza as an Area in Need of Rehabilitation, which opens the way for the town to work with owner Urban Edge Properties on a redesign and to extend a tax abatement for improvements for up to five years.

"Watching the vacancies over the years has been very discouraging," board member Alise Panitch, who lives about a mile from the Plaza, said Monday in casting her vote in favor of recommending rehabilitation status.

Retailers in the Plaza today include national brands L.A. Fitness, Aldi, Raymour & Flanigan and Total Wine & More. The complex has 390,450 square feet of leasable space and more than 1,700 parking spaces, according to the LRK report.

The Cherry Hill property is the fifth-largest among 74 shopping centers owned by real estate investment trust Urban Edge, according to Urban Edge's Form 10-K Annual Report, filed in February with the Securities and Exchange Commission. Urban Edge stock trades on the New York Stock Exchange (symbol: UE). The company bought the Plaza in May 2017 for $51,183,907, according to state property records.

Urban Edge's 10-K report notes the Plaza at Cherry Hill has 422,000 square feet, larger than the total in the LRK report. Urban Edge also owns the 218,000-square-foot shopping center near Routes 70 and 73 in Marlton housing ShopRite, Kohl's and PetSmart, according to the 10-K.

Urban Edge has reported a planned facelift for the Plaza — its corporate website says a facade renovation is planned this year — and the general agreement is it's time for a change.

"The Plaza itself has not seen a transformation since it was built and as a result it struggles with vacancy. The high vacancy rate can be directly attributed to the Plaza's deteriorating condition," lawyer William F. Harrison, representing Urban Edge, wrote to Cherry Hill Township in May with the request for a rehabilitation designation. Harrison stated 238,235 square feet of the Plaza are not occupied by the national brands and one-half of that is vacant.

The designation may be made if a property meets one of six criteria. In the Plaza's case, one might be vacancy and underutilization and the other might be water and sewer infrastructure at least 50 years old.

One resident speaking at the meeting, Rena Margulis, expressed concern that the property owner might get a tax abatement yet no one knows details of the plan. How much are they going to spend, will the improvements match the Master Plan and would Urban Edge be required to replacing the aging sewers, Margulis asked.

Cosmas Diamantis, the board's secretary and Cherry Hill's director of community development, said at the meeting that it's too early for plans. If the Plaza gets the rehabilitation designation the owner would need to come up with site plans, which board members said should be in line with the town's Master Plan.

Diamantis said there has been talk of entertainment or residential uses added to the property, but its main purpose would be retail. "We're still operating from 10,000 feet," Diamantis said.