You have permission to edit this article.
Edit
Home
Our Articles
Your Articles
Get Out
Dine
Shout-Out
Sponsors
Business Cards
Classifieds
Share This

Faced with continuing state aid cuts, the Lenape Regional High School District (LRHSD) plans to increase taxes for the next school year by an average of about 2%.

Residential property tax bills in the eight Burlington County municipalities served by the district would range from an average decrease of about $97 in Tabernacle to an average increase of about $151 in Medford Lakes, according to a preliminary version of the district's 2021-22 budget. (See table below for the impact in each community.)

The proposed budget will be submitted to the state Department of Education's county superintendent. With additional detail, the budget also will be presented at a public hearing on April 28 at 7:30 p.m. in the Seneca High School auditorium in Tabernacle. 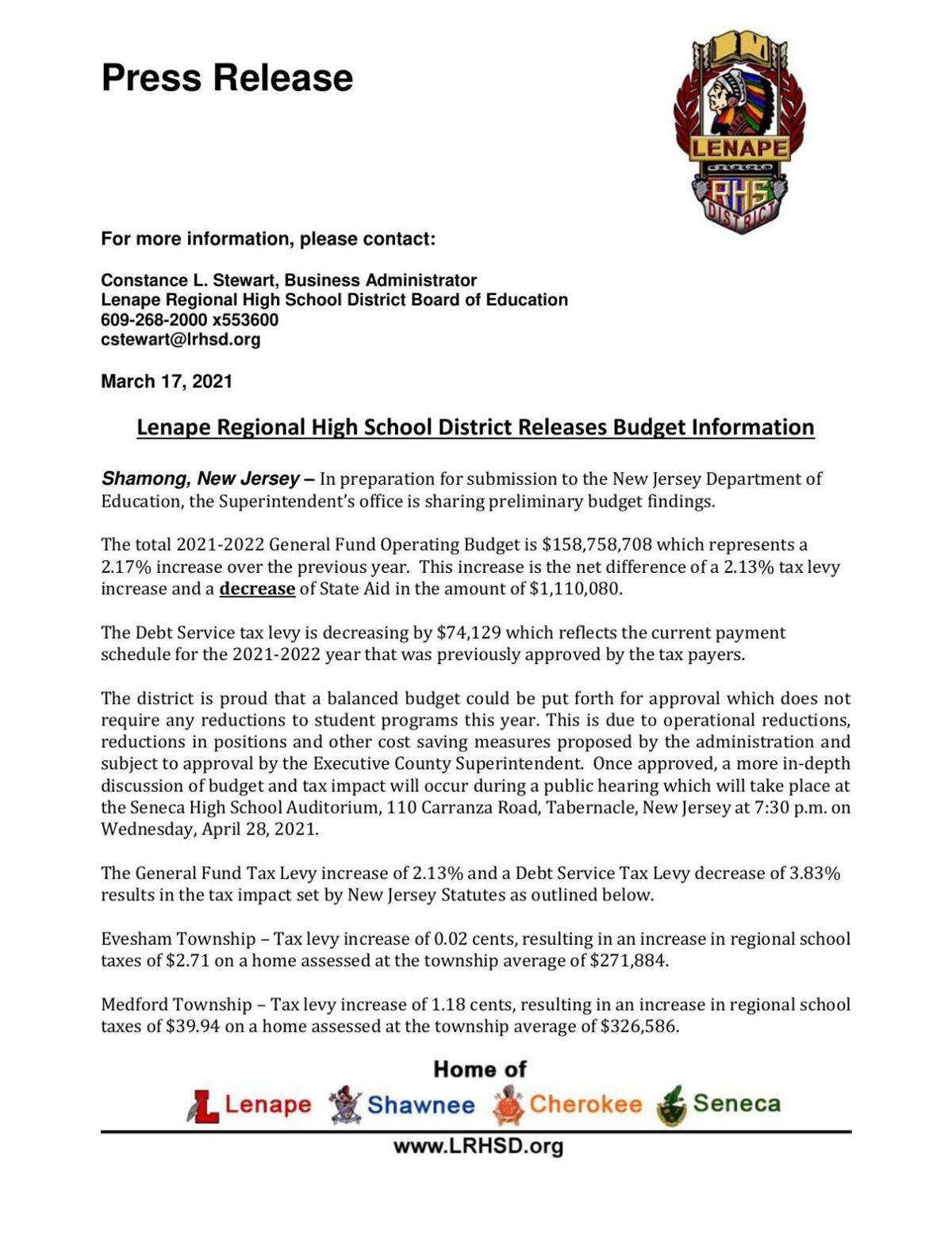 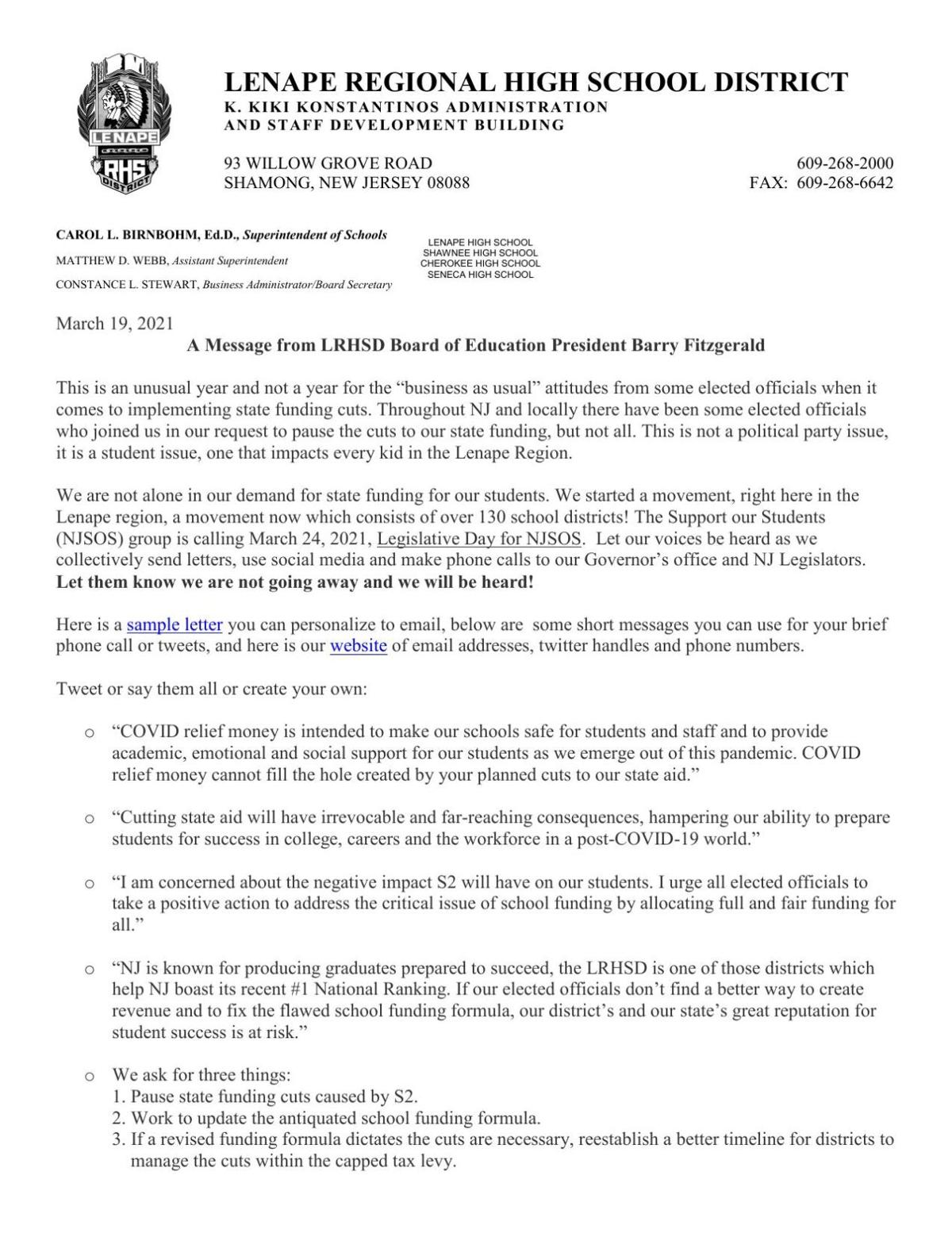 "It defies logic that anyone would think schools can get by with less of anything as we try to get back to normal school," district Superintendent Carol L. Birnbohm said in a Friday morning letter to the community, referring to the COVID-19 pandemic. "The academic, social and emotional deficits affecting large numbers of students will require the intervention of elected and appointed officials at the state and federal levels," she said.

» MORE: Back to school in-person, 5 days a week. Lenape district's seniors share their joy of near-normalcy.

LRHSD operates Cherokee, Lenape, Seneca and Shawnee high schools and the Sequoia alternative school. Total enrollment of 6,888 this year is projected to be unchanged next year.

A budget statement from the district said student programs would not be reduced in the coming year. However, positions would be cut under the budget along with other cost-saving measures, the district stated. Details were not available on Friday.

School board President Barry Fitzgerald said in his letter to the community on Friday that 130 school districts in New Jersey have declared March 24 a "Legislative Day for NJ Support Our Students" — a "blitz" day for residents to email, tweet or call elected officials to demand changes in state aid.

One tweet suggested by Fitzgerald: "COVID relief money is intended to make our schools safe for students and staff and to provide academic, emotional and social support for our students as we emerge out of this pandemic. COVID relief money cannot fill the hole created by your planned cuts to our state aid."

In smaller communities, such as Tabernacle and Medford Lakes, even small changes in enrollment of pre-high school students or high school students can affect the regional district's tax bill and the share of total LRHSD costs the community faces in a given year, she explained.

Stewart said the district had requested aid from Evesham Township, which recently set up a fund — financed by contributions from Payments in Lieu of Taxes from developers — to assist the Evesham Township school and fire districts with public safety grants.

A township grant was announced earlier this month to help the Evesham pre-high-school district pay for on-site police, or "school resource," officers. The local school district faces cuts in state funding similar to those faced by LRHSD.

However, LRHSD shouldn't count on any help from the township.

Evesham Township Manager Robert Corrales said in an email statement Friday evening that the ordinance was created for the township school and fire districts.

"While we appreciate the exceptional education provided by Cherokee High School (the LRHSD school serving the township), for Township Council to consider amending the ordinance, Evesham Township would first need to have a broader conversation with the seven other municipalities that send students to the Lenape Regional High School District," Corrales said in the statement. "This would be necessary to determine if the other municipalities would be willing to contribute equitable funding to ensure that any aid provided was directed toward the high school the students from that specific municipality attend," he said.