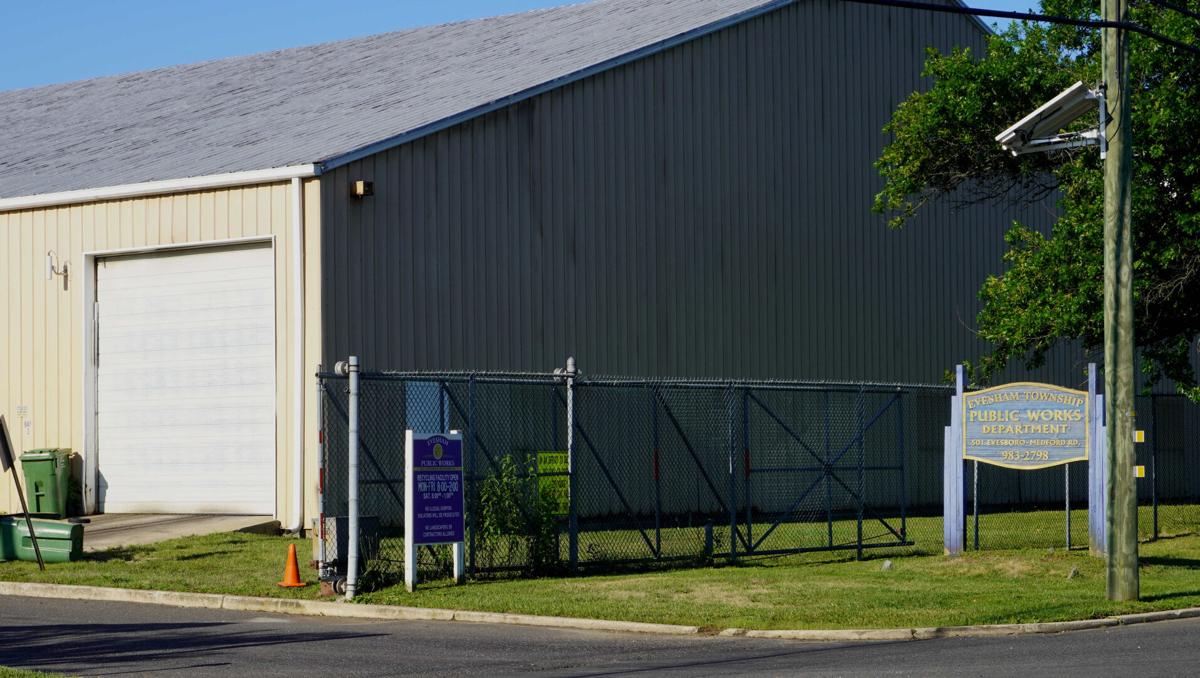 The entrance to the Evesham Township Department of Public Works yard on Evesboro-Medford Road. 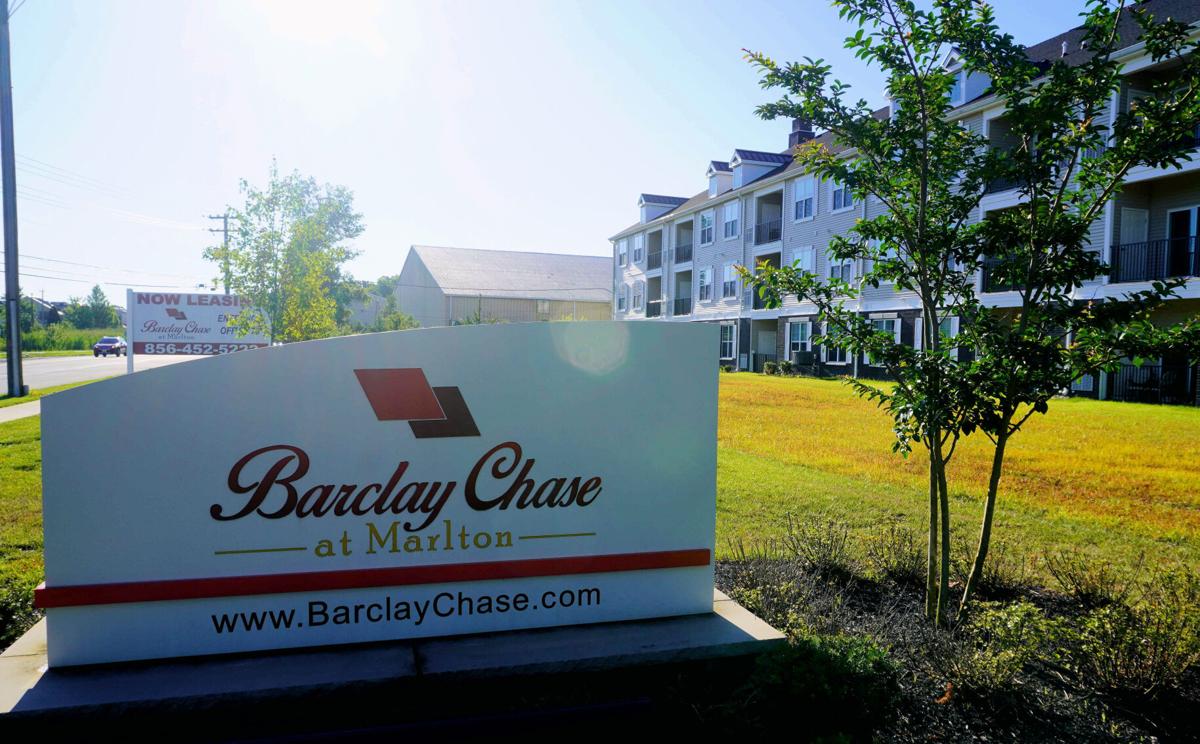 Barclay Chase apartments, looking east on Evesboro-Medford Road in Evesham. The shed in the center of the photo is the DPW garage on the site being sold. 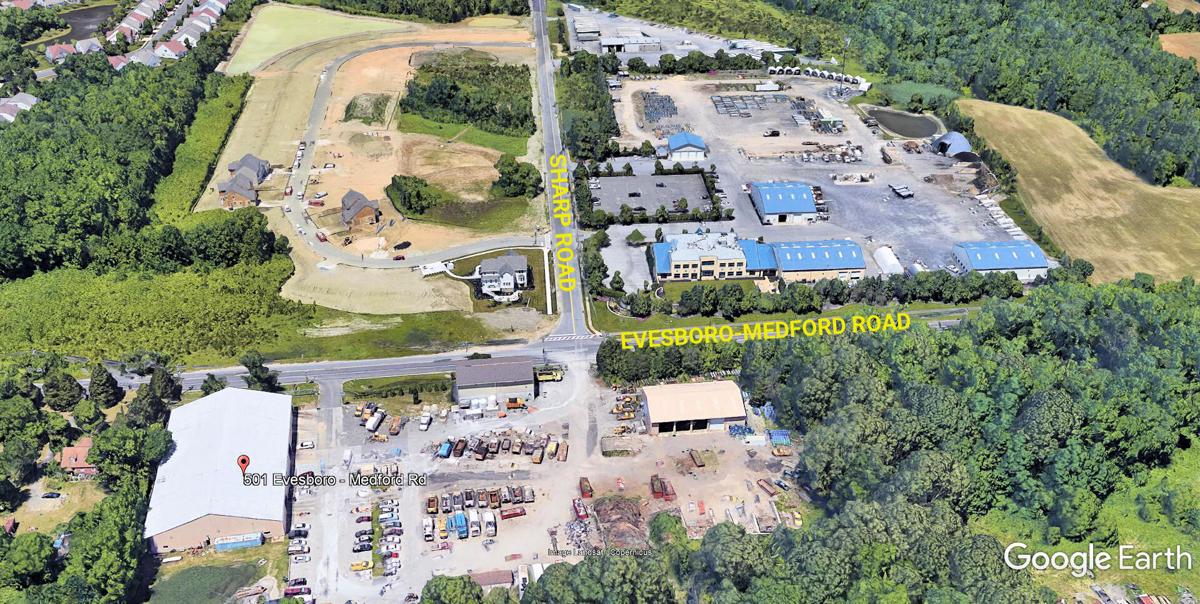 In this undated Google Earth view of the two sites, looking north, the current DPW yard is at the bottom. The land to the left of Sharp Road now is occupied by homes.

A letter of intent to sell town-owned property at the Evesham public works yard to an apartment developer for $1.52 million was approved this week by the Township Council.

The township in 2016 began the process of designating the property at 501 Evesboro-Medford Road for redevelopment and sale. At that time, township officials estimated a $1.8 million sale price.

All services now offered at the current Department of Public Works yard would move across the street to 100 Sharp Road, where the township plans to expand a building and improve the facility, Zane Clark, the township's director of public information, told 70and73.com.

Fieldstone Associates Limited Partnership of Bridgewater, Somerset County, would purchase the property from the town and build 91 market rate rental apartments on the public works yard, according to the letter of intent from Arthur Corsini Jr., a Fieldstone partner. Fieldstone developed and owns the Barclay Chase apartments that border the DPW yard. The letter notes that, in addition, the equivalent of 15% of the apartments built would be added as affordable housing.

The agreement requires a long-term tax abatement — a PILOT or payment in lieu of taxes — based on the apartment project's annual revenue, including a land tax credit. Details of how long the tax break would last and how much the PILOT is worth have yet to be worked out, according to discussion at this week's meeting.

Council members voted 5-0 to designate Fieldstone as redeveloper of the property and to execute the letter of intent.

"This is a triple play," council member Robert DiEnna said during the discussion. He said the township will be "ringing its cash register to the tune of" $1.5 million, will no longer incur expenses maintaining the property and the developer will pay the township under the PILOT program. DiEnna noted that because the DPW land is township-owned no taxes are now paid.

Council member Kenneth D'Andrea told the council that while he supports the project he was disappointed because when the project was first discussed there was talk of retail stores on the first floor. He said those who live in the Barclay Chase complex as well as area residents would benefit from a nearby place to pick up milk or order a pizza.

"It's about time that this was sold," council member Patricia Hansen said in support of the deal.

Under the agreement, Fieldstone also said it would commission a study to determine the impact of traffic at the intersection of Evesboro-Medford and Sharp Roads. A driveway from the apartment site on the DPW property would line up across Evesboro-Medford from Sharp Road.

The project's preliminary and final site plans need to go before the township Planning Board for approval.

Township spokesman Clark told 70and73.com that 264 apartments were approved in January 2016 for the original Barclay Chase redevelopment project that now borders the DPW site on the Aristone Tract. The latest plan calls for an additional 107 units on the DEP site — 91 at market rate and 16 affordable, he stated in an email message.

Clark said the township paid $6.1 million for the Sharp Road property, which was financed by capital bonds in 2016. By the time the bonds are paid off in 23 years, the cost to the town would be "net zero" because Evesham would lease to tenants on the Sharp property, collect PILOT fees and, later, taxes on the DPW site, Clark stated.

The DPW site on Evesboro-Medford Road is 5.4 acres, about a third of the 15 acres of town-owned land on Sharp Road, he said.