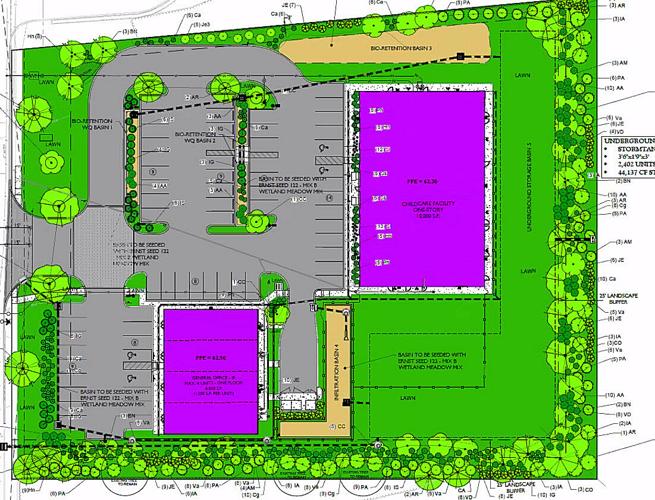 Developer plans show trees and shrubs along all four sides of the property with the heaviest in the buffer between the site and Versailles Boulevard townhomes (right). Marlkress Road is to the left. The child care building is the purple rectangle in the upper right. 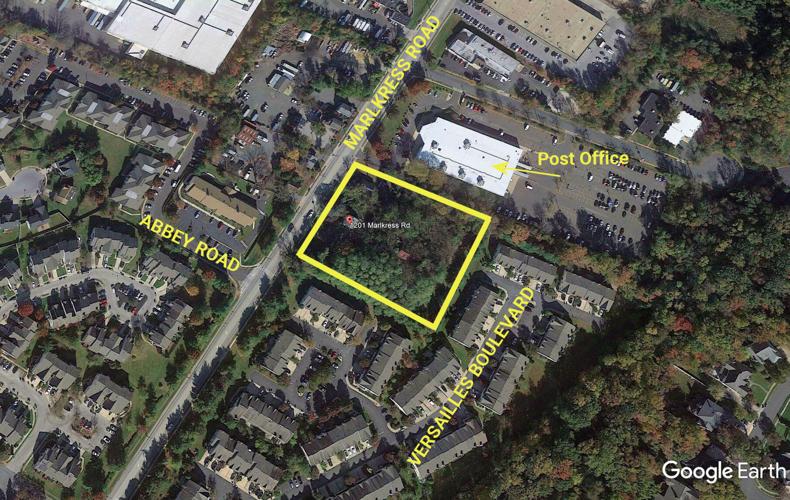 The yellow border shows the approximate scope of the project. 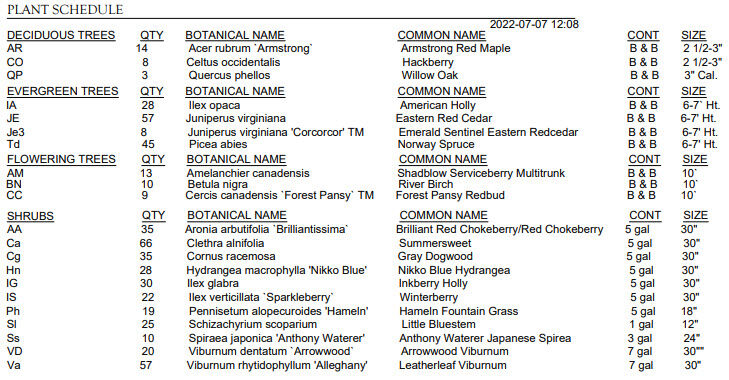 A list of planned plantings from the developer of the Marlkress Road property.

About 2.5 acres next to the post office on Marlkress Road in Cherry Hill, now occupied by vacant buildings and woods, will become a Children of America day care center and commercial property.

The Planning Board voted 5-1 in favor of the project on Monday night after the developer presented its plans and emphasized that any trees removed would be replaced on the property, which borders the backyards of townhomes on Versailles Boulevard.

Representatives of developer J&T Brothers LLC of Deer Road in Mount Laurel also said poor drainage on the site would be improved by their project and that stormwater no longer would run onto the Versailles Boulevard properties. The development company is owned by Maria Vaida, according to the application.

A national chain, Children of America has preschools in Marlton, Cinnaminson, Clementon, Turnersville, Sewell, East Brunswick and Sicklerville. Its website shows it operating in 15 states.

Besides the preschool, a 4,800-square-foot office/commercial building with up to five tenants will be built on the southern end of the property. The developer's lawyer, Robert S. Baranowski Jr., of Hyland Levin Shapiro in Marlton, said the tenants may include studios for dance or karate, a gym or fitness center, or professional offices.

Board member Marlyn Kalitan was the sole vote against the project, saying she could give the plan preliminary approval, but that she also wanted to hear more details before voting in favor of final approval.

The board gave the project preliminary and final site-plan approval and granted variances that included reducing parking to 66 spaces, although 71 are required.

Some residents objected to the plan.

Liliana Elkouss, who lives on Versailles Boulevard, told the board she just learned of the project and received no notification. "It's a great concern to me," she said.

Developers are required to mail notice of their projects to residents who live within 200 feet of a development, but Elkouss' home apparently did not fall within that distance.

Another resident, Martha Wright of Munn Lane, criticized the removal of mature trees and feared for the impact on wildlife.

"I can't say it any differently, how disappointed I am by this application," said Wright, a community advocate who scrutinizes many development applications.

The developer's plans show a variety of 27 trees that include locust, spruce, ash, oak, cedar and hickory to be removed from the property. Five of the trees are two feet or larger in diameter. Five trees along the southern property line would be retained.

Cherry Hill Township in June cracked down on tree removal with a new law requiring more reporting on plans to clear trees and the replacement of trees for those cut down. If a tree is not replaced on the developer's property, the firm must pay into the Township's new Tree Fund, which will fund tree planting elsewhere in town.

"We have replaced more than what we are taking out," Gerald DeFelicis, a planner specializing in tree replacement designs at Colliers Engineering & Design Inc. of Mount Laurel, told the board.

Many of the plantings would go on an already landscaped buffer between the property and the Versailles Boulevard townhomes.

Theodore Wilkinson, the project engineer from Colliers, said the Versailles Boulevard buffer would be densely packed with trees and evergreens. A fence ordinarily would need to be built on the property line, but the requirement was waived by the board because the developer said the landscaping would be a better buffer and if a fence were required more trees would need to be cut.

Although the ordinance requires irrigation of the plantings, the developer asked for the requirement to be waived because drought-tolerant trees and shrubs will be planted, Wilkinson said. He said the company must post a two-year bond for the project and, in that time, the landscaping will be shown to survive.

Wilkinson said the developer's crews and the Township would meet and mark as many existing trees as possible to be saved.

Only one driveway, near the center of the property on Marlkress Road, will be built. However, Wilkinson said, the owner in the future may try to negotiate the right to build a driveway on the north border of the property to connect with the post office parking lot.

An early concern in a review by one of the board's professional advisers was an incomplete review of potential pollutants on the land. Wilkinson told the board that the developer has retained a Licensed Site Remediation Professional (LSRP) to complete all necessary reviews.