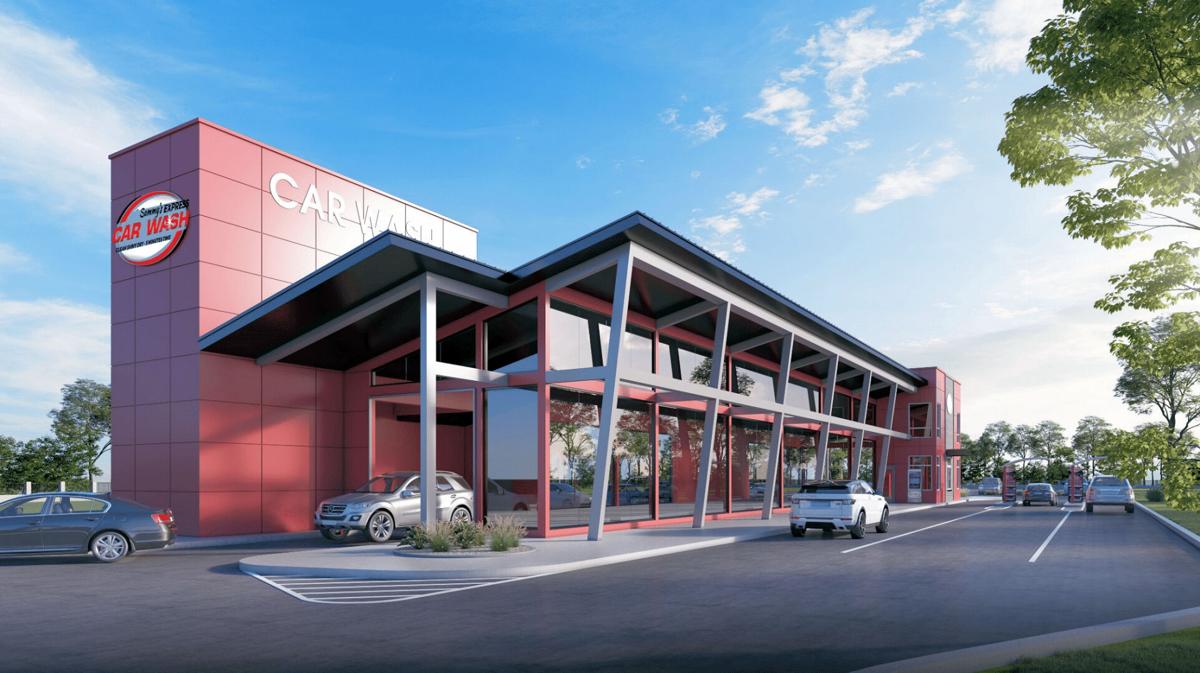 A rendering of the car wash in Mount Laurel.

After an exhaustive discussion about the impact of added noise on an area already heavy with traffic sounds, the Mount Laurel zoning board on Wednesday night approved a use variance to open a Sammy's Express Car Wash on Route 38.

Entrepreneur Robert Giannone, who operates the Sammy's on Route 38 in Maple Shade and is building one on Route 70 in Marlton, now will need to reappear before the board for site-plan approval.

Members of the Zoning Board of Adjustment voted 6-1 in favor of the car wash use, which is not permitted by Township zoning laws.  Board member Jeanne Andersen voted against the plan, saying she was concerned about operating a car wash on the property.

The only permitted car washes for the site, or for the town as a whole, are those operated as part of a service station, according to the board's discussion.

Giannone wants to build his high-tech car wash and expand existing parking on three lots between Larchmont Boulevard and Hartford Road on the westbound side of Route 38.

Joseph Abbruzzi, who owns Abbruzzi & Giunta’s Italian Market and the three lots with his partners, testified the car wash would enhance his property. His market would remain on the site.

Abbruzzi, a town resident whose business celebrated its 30th anniversary in Mount Laurel in mid-November, told the board that the car wash "would be a great complement to our existing business."

No members of the public commented on the plan at Wednesday's meeting or the previous one in November.

In their discussions, board members have focused on projected noise levels at the car wash, particularly from an outdoor vacuum area, and the possibility of cars overflowing in line onto Route 38.

Nathan B. Mosley, of Shropshire Associates LLC of Atco, the traffic engineer working for the car wash, testified he reviewed video footage of the Sammy's car wash in Maple Shade on Saturdays and Sundays in October and found no vehicles stacking onto Route 38, even during peak hours.

"There was no point at which vehicles queued out onto Route 38," Mosley testified.

And the proposed Mount Laurel car wash will have more room for vehicles in line: 21 compared with 16 for the existing one in Maple Shade, he added.

But most of Wednesday night's questioning concerned the sound-level testing at the Maple Shade car wash and at the Mount Laurel site that was performed for Giannone.

Shropshire sound engineer Randal C. Barranger testified at last month's board meeting and on Wednesday night that it was difficult to determine the impact of the added noise of the car wash on sound levels around the properties. The daytime traffic noise from Route 38 already exceeds the state's maximum permitted decibel levels, he said.

Board planner Joseph Petrongolo told the board that it should explore the impact of the car wash on a neighboring condominium community on Aberdeen Drive, to the north of the site, because the plan will request variances for a shorter-than-required landscaped buffer zone.

Damien O. Del Duca, of the Del Duca Lewis law firm in Haddonfield, representing the car wash, and Giannone agreed that the car wash company would measure actual sound levels when the car wash is fully operational to make sure a significant amount of noise is not added to the existing background noise of the area. Sammy's would operate only during the day, when Route 38 noise levels are at their highest.

If the Mount Laurel car wash adds significantly to ambient noise, the company will mitigate the extra sound with measures that could include a denser wall at the northern border than the one now planned, according to testimony.