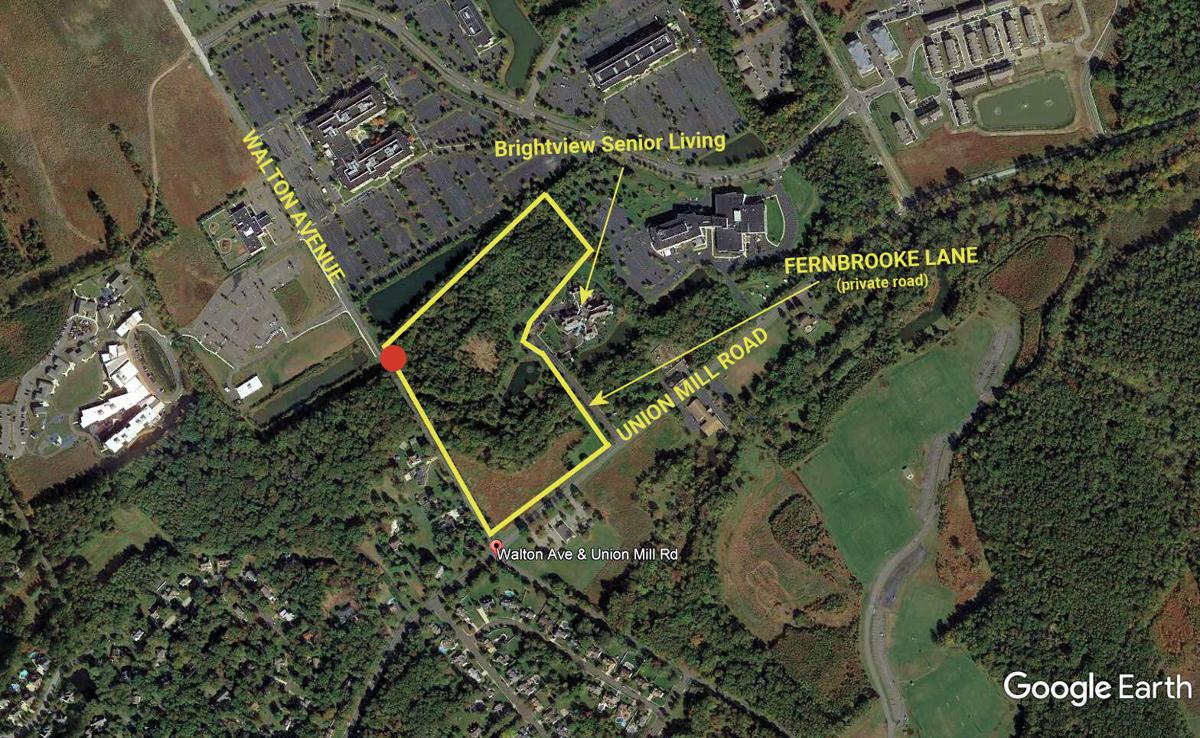 The warehouse would occupy part of the acreage owned by the applicant (shown in yellow border). Trucks would enter and exit from the site at the red marker and travel only north (up, on the photo) on Walton Avenue because a bridge to the south cannot handle the weight. In its original application to the Mount Laurel Planning Board, the applicant said truck traffic would be evenly split between the Walton Avenue and Fernbrooke Lane driveways. Fernbrooke is owned by the Brightview Senior Living complex. However, after concerns were raised, the applicant said the Walton Avenue driveway would be the only access for trucks. 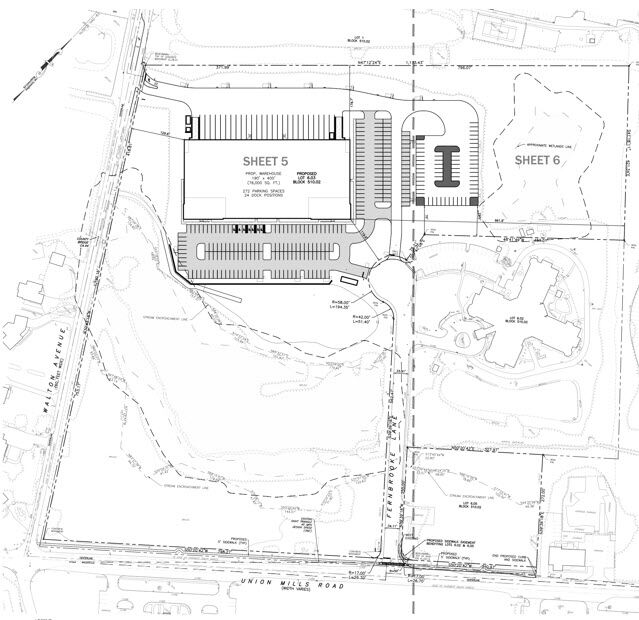 In the plan, driveways on Walton Avenue (upper left) and off Union Mill Road (lower right) are shown. The Brightview Senior Living facility is on the right.

A concerned Mount Laurel Planning Board, worried about truck traffic, Thursday night postponed a decision on a new warehouse near Union Mill Road and Walton Avenue.

In its original application to build the 76,000-square-foot warehouse, applicant Union Mill Road LLC said truck traffic would be evenly split between driveways on Walton Avenue and on Fernbrooke Lane, which connects with Union Mill Road and is a private road owned by the Brightview Senior Living facility. (Several spellings of Fernbrooke have come up, but this is how owner Brightview spells it on its website.)

An amended application agreed to route all truck traffic to Walton Avenue, with trucks traveling only north because a bridge to the south could not handle the extra weight. Representatives of the applicant told board members Thursday night that signs would instruct truckers that they must use only the Walton Avenue driveway.

But the proposed truck routing wasn't enough for board members and their professional staff advisers.

Added board planner Joseph Petrongolo: "There are some serious concerns that still need to be addressed."

A decision on the application from Union Mill Road LLC, which is affiliated with CoreOne Industrial LLC of Connecticut, will be postponed until more documentation is provided. Public testimony on the plan and a board decision is scheduled for the October 14 meeting. About 65 people were signed on for Thursday night's virtual meeting.

Two major issues emerged in the board discussion. One is how the truck traffic restriction on the Fernbrooke Lane driveway would be enforced. The other issue was safety on the driveway — many people associated with the senior care center have long parked along the driveway, board members said.

The applicant's lawyer, Robert S. Baranowski Jr. of the Hyland Levin Shapiro firm in Marlton, told the board that the developer has reached an agreement to use Brightview's driveway for non-truck traffic. He said the developer would make space on its property available for Brightview parking.

However, the board indicated it wanted to see any agreement.

"It could be a significant safety problem along Fernbrooke Lane," said board traffic engineer Michael Angelastro.

The board also expressed concern about large-truck traffic and the space to make turns at the intersections on or near Walton Avenue north of the proposed site. The trucks would include larger tractor trailers, which are nearly 74 feet long, from the front of the cab to the end of the trailer.

Lawyer Baranowski emphasized several times during the meeting that the property is zoned industrial and the warehouse is a permitted use. The applicant was seeking preliminary and final site-plan approval from the board.

CoreOne purchased the land more than a year ago with plans for a medium-sized warehouse, explained Robert B. DePiero, one of the company's founders.

"We aren't going for the couple-hundred-thousand-foot industrial building that is going to market itself to the large distribution centers (like Amazon)," DePiero testified to the board. DePiero said the warehouse, which is being built on spec, would seek tenants who, for example, might manufacture locally and need off-site storage.

A pond now on the site would be kept and water quality treatment from runoff would be improved, according to the application.