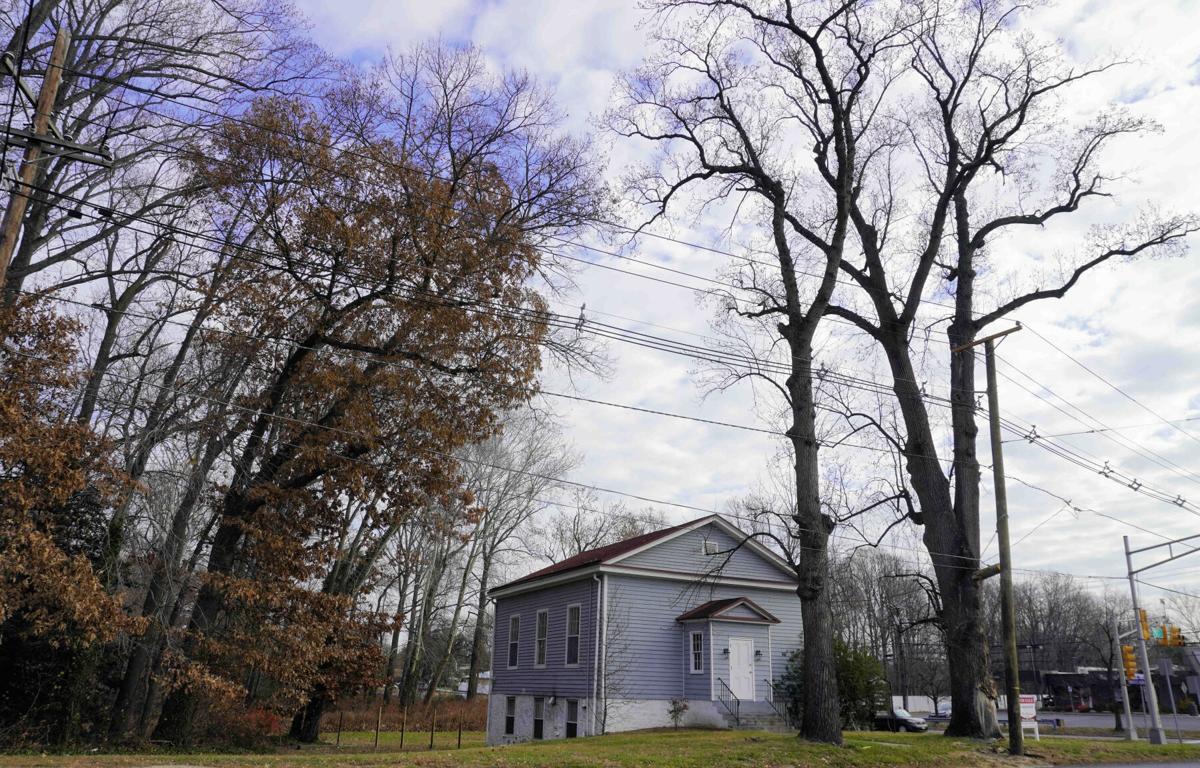 Up for sale, the Glendale Methodist Episcopal Church at Haddonfield-Berlin and White Horse roads in Voorhees is listed on both the National and New Jersey Register of Historic Places. The two towering tulip poplar trees at the entrance, planted when the church was built in 1855, are part of the historic listing. They almost were lost to a Camden County road widening project in 1995, but the church won out. 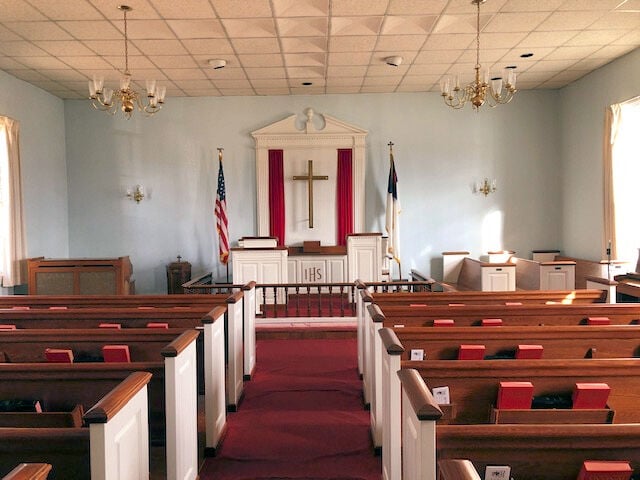 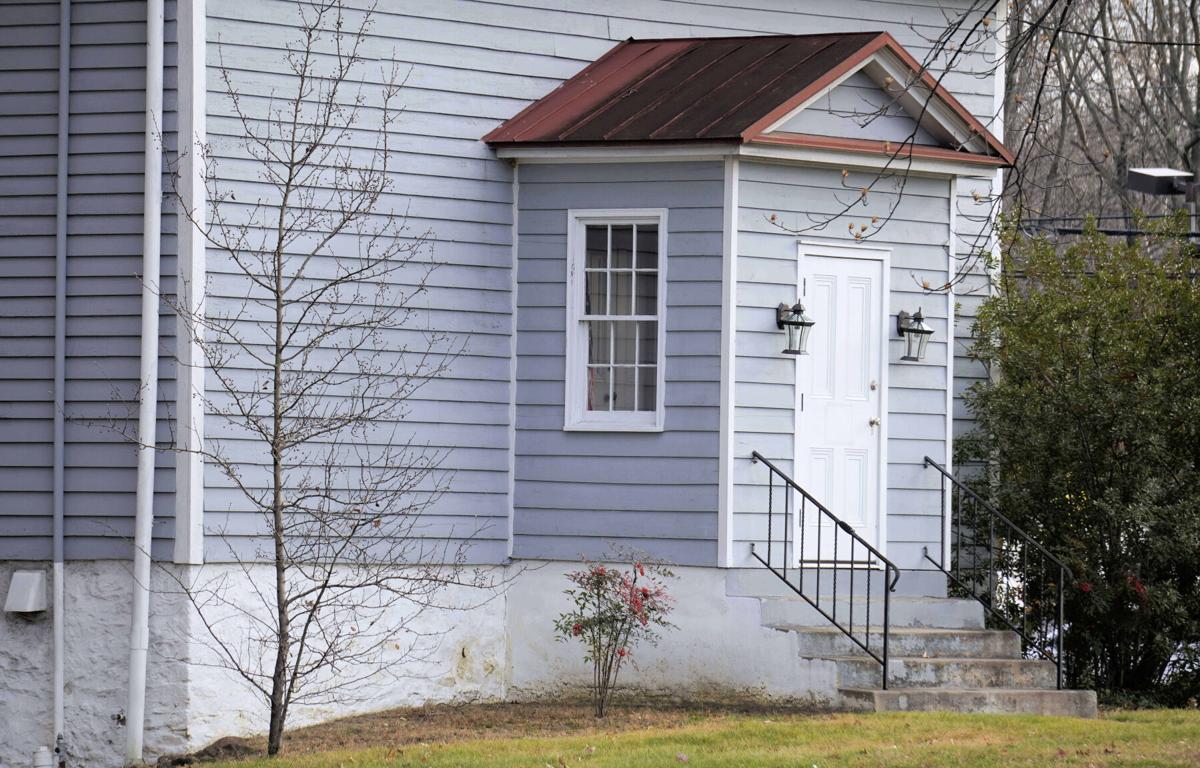 The entrance to the worship space at Glendale Episcopal Methodist Church. 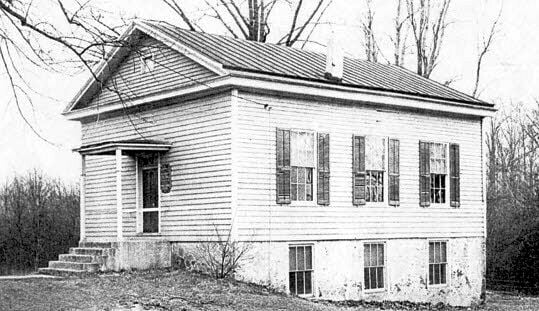 The church in a photo taken around 1930.

One of Camden County's most historically significant churches is for sale because a statewide religious organization dissolved the congregation last year and put the building in the hands of real estate agents.

The 166-year-old Glendale Methodist Episcopal Church in Voorhees, at the intersection of Haddonfield-Berlin and White Horse roads, has been listed for the last 26 years in both the National and New Jersey Registers of Historic Places. It is the only surviving building from the old town of Glendale, now part of Voorhees.

"The historic significance of this structure cannot be underestimated," Haddon Heights architect Margaret Westfield told 70and73.com in an interview. "It does have a level of protections and we hope that is what is going to save it," said Westfield, who wrote the application that in 1995 got it on the historic registers.

When the structure was built by area farmers, the bottom floor was segregated from the top. The lower level was a one-room public school and the top level was used for worship. The application for the historical listing notes that the school represents the development of public education in New Jersey and at the time was believed to be the second-oldest surviving public-school building in the county.

RE/MAX Millenium lists the property for $264,000, with 27 exterior and interior photographs on its website. A note suggests a sale is pending and other realty sites state the property no longer is available.

The United Methodists of Greater New Jersey, based in Neptune, Monmouth County, took ownership of the property from the local congregation last year and will not discuss the sale. Heather Mistretta, editorial manager of the organization, told 70and73.com that "the sale is still ongoing."

After a meeting with the United Methodists group, the church was closed in June 2020, architect Westfield said. A buyer could use it for apartments, offices or even a museum and get a 20% investment tax credit on the rehabilitation, she said.

Two towering tulip poplar trees frame the entrance to the church. They were planted in 1855 and the church congregation made sure they remained healthy, employing an arborist to tend to them. In 1995, with the property debuting on lists of protected historic places, the church managed to overcome Camden County's plans to widen Haddonfield-Berlin Road and sacrifice the trees.

Voorhees Mayor Michael Mignogna told 70and73.com that the church "is an important part of the history of Voorhees."

For Jennifer Stafford, the church evokes some of the most vivid memories of her childhood.

Stafford, part of the Stafford family of farm owners in the Voorhees area, had been a member of the church for about 50 years.

"My entire collective family went there," Stafford, who now lives in Florida, told 70and73.com in an interview. Her family includes those who ran the historic Stafford Farm less than a mile away on White Horse Road. The farm now is owned by entrepreneur Bill Green, who is transforming the preserved farmland into Saddlehill Cellars, a vineyard, winery and flower farm.

"One of the most vibrant memories would be what we called the living nativity," Stafford said.  Animals were transported from the farm to a nativity scene on the church property and it often created what Stafford called "mini-traffic jams."

But her memory of the scene was, as a child, participating as a character — and being "freezing cold" and drinking "terrible hot chocolate" in her robes.

Stafford said she was troubled by the Methodist organization's takeover of the church property last year.

"They sold off a record number of churches that year," she said, alleging the takeover of Glendale was "unchurchly" and the seven-minute meeting that closed the church did not follow protocols required by the United Methodists.

Stafford, who said the motivation was money, said inquiries to the Methodist bishop in charge of New Jersey have gone unanswered.

Her father, Edmund "Pete" Stafford, 82, who now lives in Naples, Florida, told 70and73.com that the church was built by farmers. "Everybody there were farmers," he said.

The sandstone used in the foundation was plowed out of area farm fields, many of them likely from the historic Stafford Farm, Stafford explained.

He also recalled stories of one of the most famous regular visitors to the farm and church: poet and writer Walt Whitman, who at the time was living in Camden but summering at the Stafford Farm. Whitman used to rub his body with mud from the small creek behind the church, thinking it had healing powers for his partial paralysis.

"Domicil'd (sic) at the farmhouse of my friends, the Staffords, nearby, I lived half the time along this creek and its adjacent fields and lanes. And it is to my life here that I, perhaps, owe partial recovery (a sort of second wind, or semi-renewal of the lease of life) from the prostration of 1874-75," Whitman wrote in "Specimen Days."

The poet, who died in 1892, used to alarm the children, Pete Stafford said.

"Children were afraid of him because he was shouting behind the church," he said. "No doubt he was reciting his poetry."

According to the application to the National Register: "Linda Engle Stafford also recounted that she was shocked as a child when she saw Whitman bathing naked in the creek behind the church."

One footnote that has some wondering about is a restriction that was written into the original deed for the church.

Alexander Cooper, an early settler of the area, granted the property to the trustees — including Joseph Stafford — on November 20, 1855 with a stipulation that each year, there must be a church meeting lasting for an hour. If that does not occur, the deed states the property must revert to the Cooper Estate, the National Register application notes.