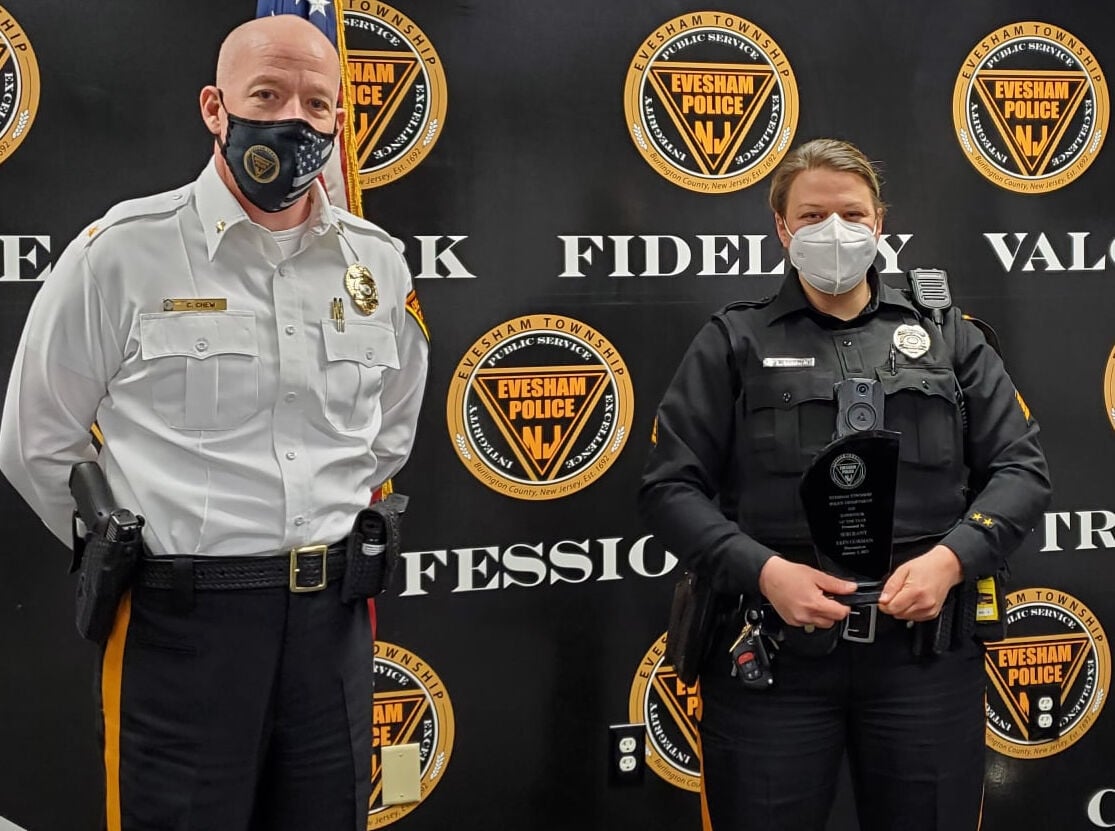 Erin Gorman with her 2020 Supervisor of the Year award and Police Chief Christopher Chew. 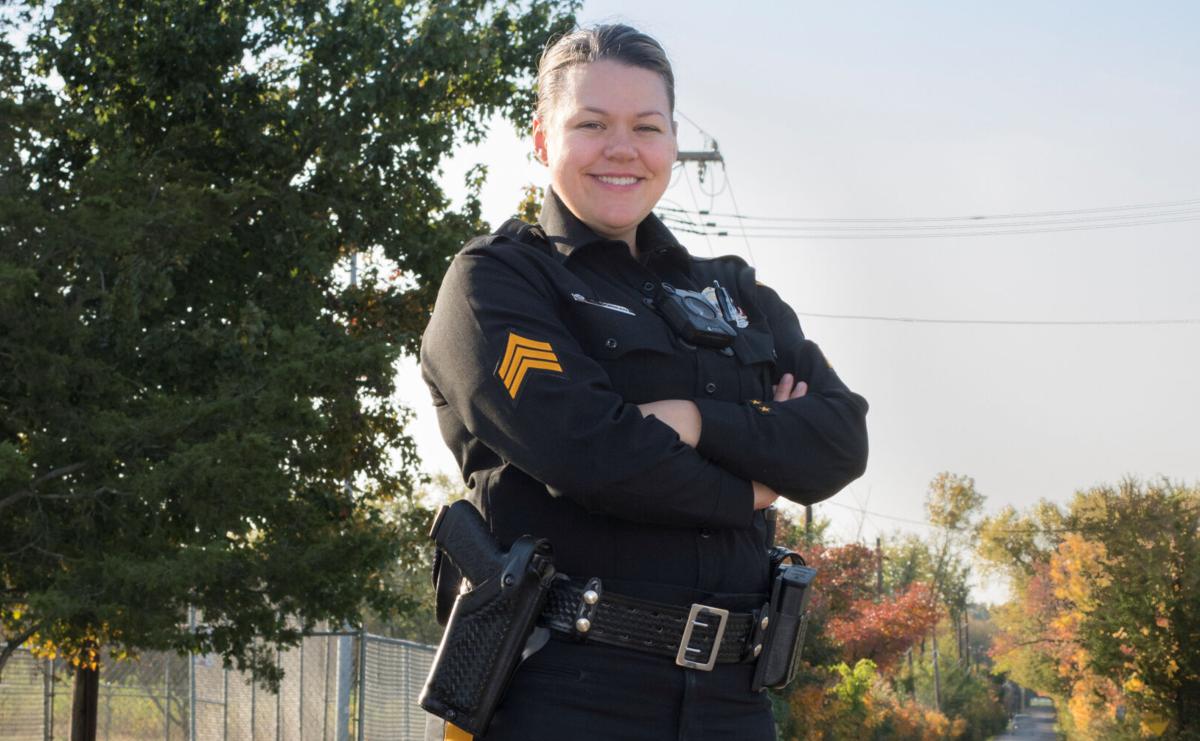 An award-winning police sergeant last month sued Evesham Township for gender discrimination because she was twice passed over for promotion to lieutenant.

Evesham Police Sgt. Erin Gorman — the department's Supervisor of the Year for 2020 — filed her complaint against Township Manager Robert Corrales and others in New Jersey Superior Court in Burlington County on August 17.

Gorman, 38, in May was featured in an article by 70and73.com about Burlington County's largest police department and how she had risen to the rank of sergeant, the highest-ranking female officer. The department was the only one in New Jersey to have joined a New York University School of Law 30x30 initiative to have women account for 30% of its recruit classes by 2030 and to "ensure (that) police policies and culture intentionally support the success of qualified women officers throughout their careers."

Through her lawyer, Jacqueline M. Vigilante of the Vigilante Law Firm of Mullica Hill in Gloucester County, Gorman requested a jury trial to hear her discrimination complaints.

At the heart of the suit are allegations that two former department lieutenants whom she previously had charged with harassment were permitted to sit on the promotional peer review board.

The suit also alleges that Township Manager Corrales required Police Chief Christopher Chew "to provide the raw scores (of her written exam) and then manipulated his scores to purposely disadvantage" Gorman in the 2020 promotional process.

Before the 2020 process, the lawsuit states, the Township Manager was not given access to the exam or other scores and "could not manipulate his scores to the advantage or disadvantage of any candidate."

An interview with Corrales counted 40% — he graded each candidate on a 100-point scale — toward her final score and the written exam counted 45%, the suit stated. A leadership evaluation and education attainment made up the remainder of the final scoring.

Gorman scored 94 on the written exam — higher than the scores of the four males who also took the test, according to the suit.

"Plaintiff was purposely underscored by the Township Manager so that she would not be promoted," the suit alleges. "Despite Corrales' low score, Chief Chew informed plaintiff that he did not believe she answered any questions incorrect in her interview. Chief Chew's notes reflected that plaintiff answered the questions correctly and there were no issues with her responses." The interview with Corrales was attended by Chief Chew.

Gorman scored 80 on the Corrales interview, tied for the lowest score with one of the other four candidates. Corrales did not provide his scoring to the police chief and when Gorman, who joined the department in 2005, asked to "review Corrales' notes so that she may learn how to improve, plaintiff was denied access to them."

The lawsuit notes that two now-retired lieutenants, Bruce Higbee and Ronald Ritter, were allowed to participate in peer reviews during Gorman's application for promotion to lieutenant in 2017 and 2020.

"In 2008, plaintiff filed a harassment charge against then-Sgt. Higbee," the suit states, noting: "The charges were investigated and Higbee was disciplined for a violation of the workplace harassment policy." The suit states Higbee "was permanently restricted from supervising (Gorman)."

A 2015 complaint of harassment against Ritter "was sustained and Ritter was disciplined as a result," the suit states. "Following that investigation, (Gorman) was never again under the supervision of Ritter."

During the 2017 peer review for the lieutenant promotion, Gorman "was rated exceptionally low" by both Higbee and Ritter, according to the suit. In the 2020 review, Gorman had the second-lowest score for peer evaluations "due to Higbee and Ritter," the suit alleges.

"Despite past credible complaints regarding Ritter and Higbee, defendants failed to exclude them from the promotional evaluation process, allowing them to retaliate against plaintiff for her protected activity," according to the suit.

After the 2017 lieutenant selection, Gorman was told her lack of experience as a patrol supervisor weighed against her, the suit states.

"In response to that feedback, plaintiff requested a reassignment to patrol in order to enhance her experience as a patrol supervisor," the suit notes. Gorman was reassigned to patrol in early 2018 and "exceeded all expectations in that role."

Gorman is seeking an unspecified amount of damages for back pay, punitive damages and attorney fees.

Gorman grew up in Gloucester City, where her father rose to deputy chief of the police department after 25 years and where her sister now is on the police force. She still lives there with her three children and husband, Sean Gorman, who is the former principal of Gloucester City High School and now is the district superintendent for Gloucester City Public Schools. She graduated with a bachelor's degree in criminal justice from Rutgers University in Camden and then graduated from the Camden County Police Academy.

In the May 70and73.com article, Police Chief Chew said Gorman had made an impact on the whole department.

The article noted: "Each year, the department has an annual awards ceremony and in the latest Gorman received the greatest number of nominations from her peers for supervisor of the year."