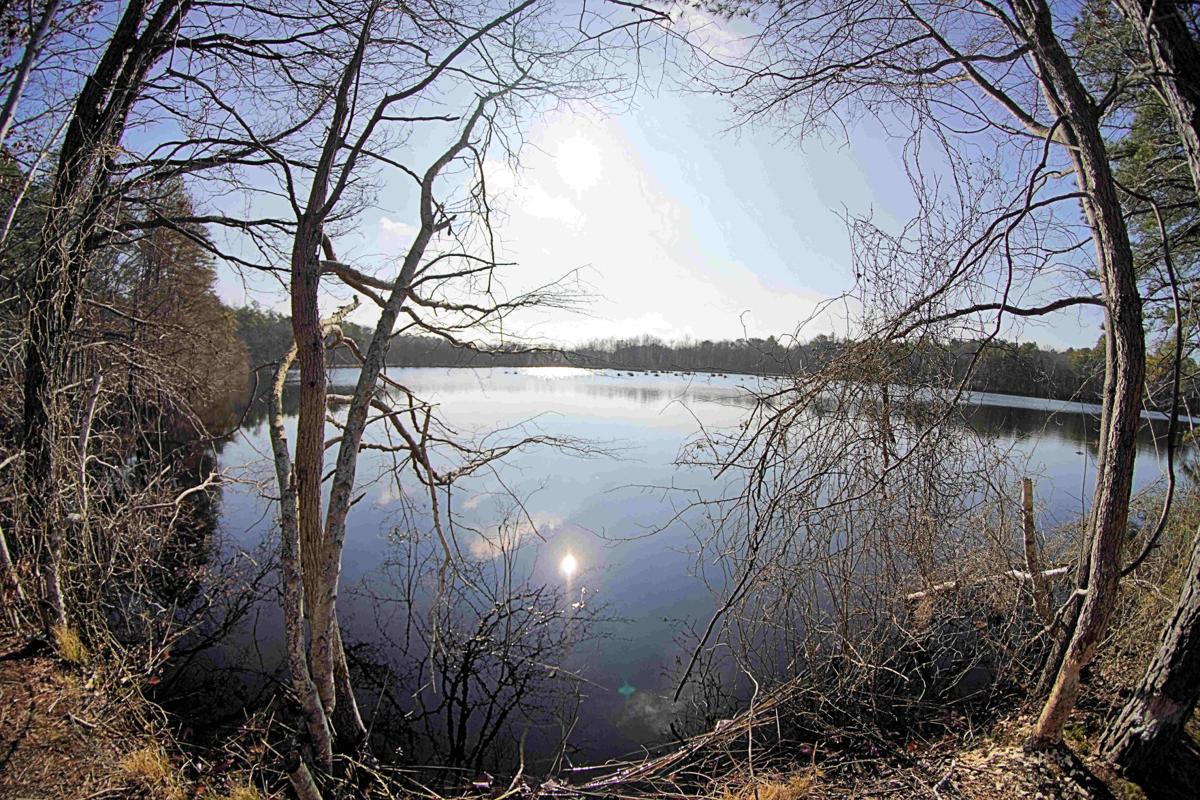 One of the former cranberry bogs dotting the preserve, enjoyed by hikers and beavers alike. 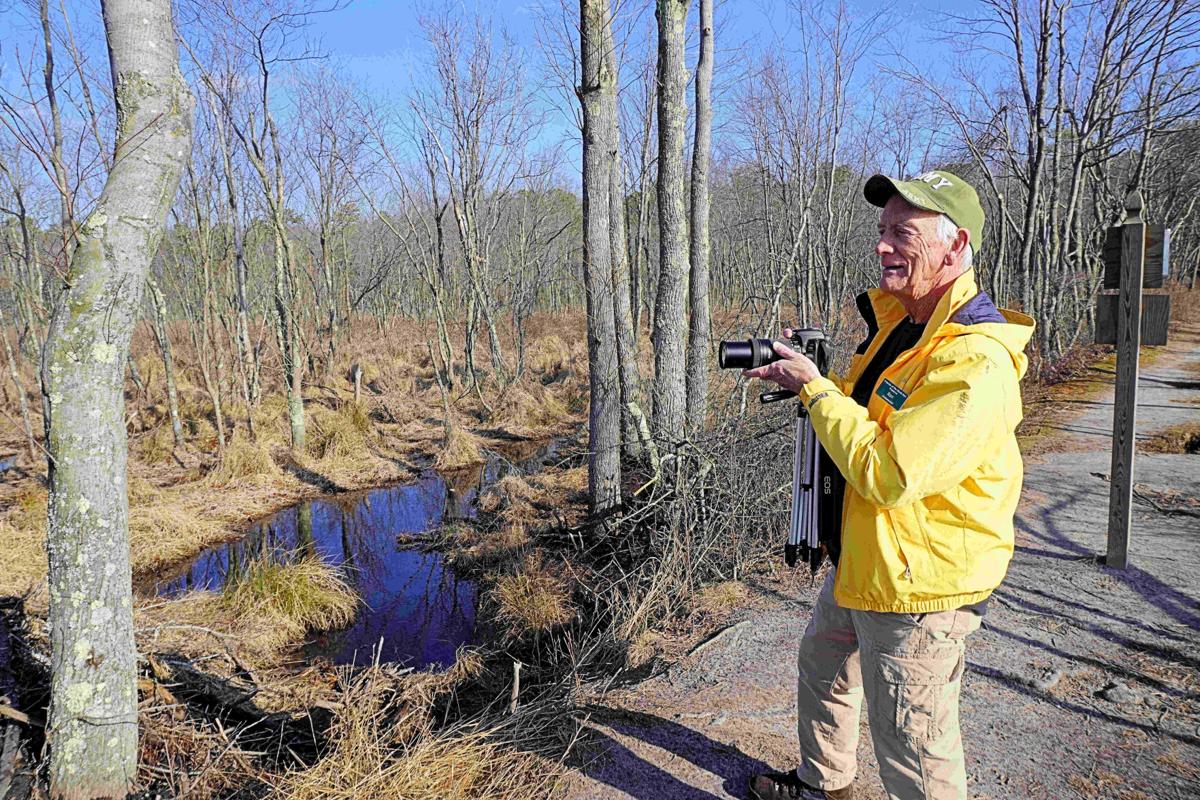 Longtime ambassador of the Friends of the Black Run Preserve, Ron Pugh of Marlton, had been out since 6 a.m. photographing the morning fog, sunrise and beavers. He's at the preserve several times a week and knows it like his own backyard.

Like many other parks and forests, Black Run's 1,300-acres of trails, beaver dams and, often, solitude welcomed hikers back Saturday, May 2.

The rules are clear on Black Run's website, including "strongly" recommending the use of face masks. Other COVID-19 changes: social distancing required, if parking lots full, do not park on street; no restrooms available.

(The 70and73.com article below first appeared three months ago.)

With arms outstretched, Ron Pugh looks to the sky and closes his eyes.

You can feel it wash over you, he says on this unseasonably warm and sunny January morning.

Around him, and washing in, peaceful wilderness. No sound. No traffic. No crowds or congestion.

Pugh stood in 1,300 unspoiled acres of Pinelands beauty, where nothing could reveal that the closest home in the 2,500-home Kings Grant community was just a half mile to the east. Or that the giant Virtua Voorhees Hospital and busy Route 73 was about a mile to the west.

This is the Black Run Preserve on land owned and saved by Evesham Township, where Pugh shows up several times a week as one of the Ambassadors of the Friends of the Black Run Preserve. On this day, he arrived around 6 a.m., navigated the trails in the dark and photographed the sunrise over a former cranberry bog. Pugh also got a rare treat when the lights came on: one of the Preserve's many bashful beavers put on a show for him in the water.

As he walked the trails he knows so well, Pugh stopped other hikers to say hello. That's one of the jobs of an ambassador: to promote friendliness on the dozen miles of trails in the Preserve. One biker said he's from North Jersey and visiting his family. A hiking couple said they're new to the area and wanted a look. Others Pugh knows better, they're the regulars like himself on the trails.

John Volpa says such social interaction is essential. It's a peaceful place, show respect. Just a simple "hello" will do, said the retired teacher who has been the visionary for what once was a trash-strewn patch of land. Volpa founded the Friends of the Black Run Preserve in 2012 after he spent several years relentlessly pushing the town to open it as a preserve.

Acreage has been added to the Preserve over time, but a purchase of 711 acres in 2000 of what was known as Kings Grant Phase II by the township for open space was the genesis.

When the land was bought for $6.4 million from the Municipal Utilities Authority it was reported as the largest parcel preserved to date by the township. Before the MUA owned the land, it was owned by a developer that had township approval to build 240 homes over 120 acres. Those homes, like thousands of others in Kings Grant — originally 9,000 homes were planned — never were built, according to township records.

What surprises Volpa is that many residents of 70and73 Land know little of what he calls a "pristine island of Pine Barrens ecology."

But word is getting out — even beyond the South Jersey community of hikers, bikers, trail runners, birders, naturalists and dog walkers (don't forget the leash, reminds Volpa). He said he's seen cars from North Jersey and Philadelphia parked at trailheads.

Consider one lifelong resident of Evesham who has never set foot on the land.

"I recently only went for the first time and I've lived here forever," Evesham Mayor Jaclyn Veasy told 70and73.com in an interview. Veasy called the Preserve "a great thing" and said the nonprofit Friends of Black Run Preserve have "really done a great job."

Volpa gave the mayor — who plays a role in overseeing the Preserve because it's town-owned — a special tour of the trails.

“People don’t realize it’s there. Or maybe they’re hesitant to try out something that they’ve never done before. That was part of my thing: I don’t even know what to do when I get there….It was good to walk with John,” Mayor Veasy told 70and73.com. “Getting the community to utilize that park would be one of the best things.”

Visit the Friends of the Black Run Preserve website for maps, history and more

When Volpa is asked about the wildlife on the Preserve, he rapidly fires out a list: turtles, snakes, frogs, insects, deer, fox, raccoons, muskrats, moles, skunk, porcupines, many varieties of birds, including owls.

And then there are the beavers. Lots of beavers.

"We've kind of resigned ourselves to living with them," Volpa said. Evidence of the beavers is everywhere around the old bogs — from their giant lodges where they live to the dams they construct around running water to protect their lodges to chewed-through tree stumps.

But the byproduct of the beavers' hard work are flooded trails and bridges. When 70and73 visited the Preserve and hiked the trails with Ambassador Pugh, a surveyor was taking measurements across a stream. This will be the site of the "Peace Bridge," which had to be relocated three times because of the beavers and their lodge building.

The bridge is a $140,000 investment funded by the township, a donation from the REI Co-Op and donors to the Friends of the Black Run Preserve. The organization is raising money to cover its share of the costs.

"The planned 'Peace Bridge' will provide safe access for trail users to utilize the west side of the Preserve. In 2004 a flood breached a sand dike of an old cranberry bog and its trail connecting one side of the preserve with the other. For the past four years, locals utilized a structure known as the 'shaky bridge' to access the trails on the west side of the preserve. The 'shaky bridge' has been claimed by a clan of beaver who built a five-foot dam on top of it," the organization's website notes.

Volpa, director of education for Pinelands Adventures in Shamong, sat over breakfast at a local restaurant with 70and73.com and recalled what, in essence, was an ongoing bureaucratic fight early on with the township to complete the project that developed from an idea in 2004. Today, he credits current officials in the township as being great partners in the Preserve. And now he appears to have captured the attention of Mayor Veasy.

Another obstacle the founders of the Preserve encountered was a piece of its history: "The place was a dumping ground," Volpa said.

Tons of trash, concrete and old tires were pulled from the acres in the early days. Volpa said 14 dump truck loads were removed, including an abandoned 16-foot motorboat. He recalled students from DeMasi Middle School removing 400 old tires — a breeding ground for mosquitoes.

A hiker today wouldn't know that the place was a free dump illegally used by contractors and others. It's hard to spot a piece of paper or anything that isn't part of the natural environment.

Volpa makes it clear he and the Friends are grateful for all of the help along the way. "Good fortune just keeps coming," he said.

He points to the continuing support of the REI co-op store on Route 70 in Marlton. The co-op has donated $73,000 over the years and offers other assistance, such as hosting some of the Friends' meetings.

An anonymous donor made it possible for the Friends to hire a part-time administrator; everyone else is a volunteer. A volunteer trail maintenance crew in 2017 built a 2.6-mile trail in two days. The Eagle Scouts and Girl Scouts have been involved, embracing projects to build the trail's kiosks. Local schoolchildren were involved in helping to build 50 nest boxes, which provide shelter for the Preserve's many birds which are then monitored as part of the Cornell University Ornithology Lab NestWatch initiative.

And Volpa credited the Camden office of Gilmore & Associates Inc., a regional civil engineering firm, with providing $40,000 in services, including the site work for the new Peace Bridge. "They are really making this project move forward," Volpa said.

What's in the future?

"Our short-term goals are to expand in what the township already owns," Volpa said. However, land acquisition in the future could take the preserved space from the current 1,300 acres to 2,000.

Black Run's trailheads, which provide access and in some cases parking, include those on Kettle Run Road, near Bortons Road and from the Kings Grant development along a path owned by the MUA.

Trail improvements, the new Peace Bridge and other work are intended to enhance the experience and to make visitors understand "it's a place to feel safe," Volpa explained. Ambassadors conduct scheduled hikes, provide special guided tours and generally roam the acres answering questions and giving directions. Orange triangles along the trails have locator numbers, so a lost hiker can call 911 on a cell phone and give the exact location.

Like any development in the Pine Barrens, just about anything the Black Run Preserve wants to do requires permission from the New Jersey Pinelands Commission. Once plans are in place for the Peace Bridge, for example, the commission will be approached for a permit, Volpa said.

A recent brainstorming meeting held by the Friends produced a lot of ideas, he said. They include trail improvements that would remove some dead ends, which require hiking in and then hiking out on the same path. "Everyone who hikes likes loops as opposed to ins and outs," Volpa said.

Additional space for parking and connecting trails to the town-owned property at the site of the former Aero-Haven Airport on Kettle Run Road also came up as projects at the visions meeting.

To Volpa, the Preserve's mission can be narrowed to three things: environment, economy and health. The environment is obvious. The economic mission is contributing to outdoor tourism in Evesham and the health goal is to promote the health of residents through outdoor recreation, particularly residents who might be cooped up in apartments, said Volpa, a Marlton resident who grew up in Sicklerville when it was mostly farms (he says he's been exploring "my whole life").

"It could truly be a gem for this township," Volpa said.