The site for the proposed super Wawa on Route 73 in Voorhees. The intersection with Kresson Road is to the left. The Wawa would go on a landlocked and wooded lot behind TD Bank. The entrance and exit on Route 73 would be near the For Sale sign at right. 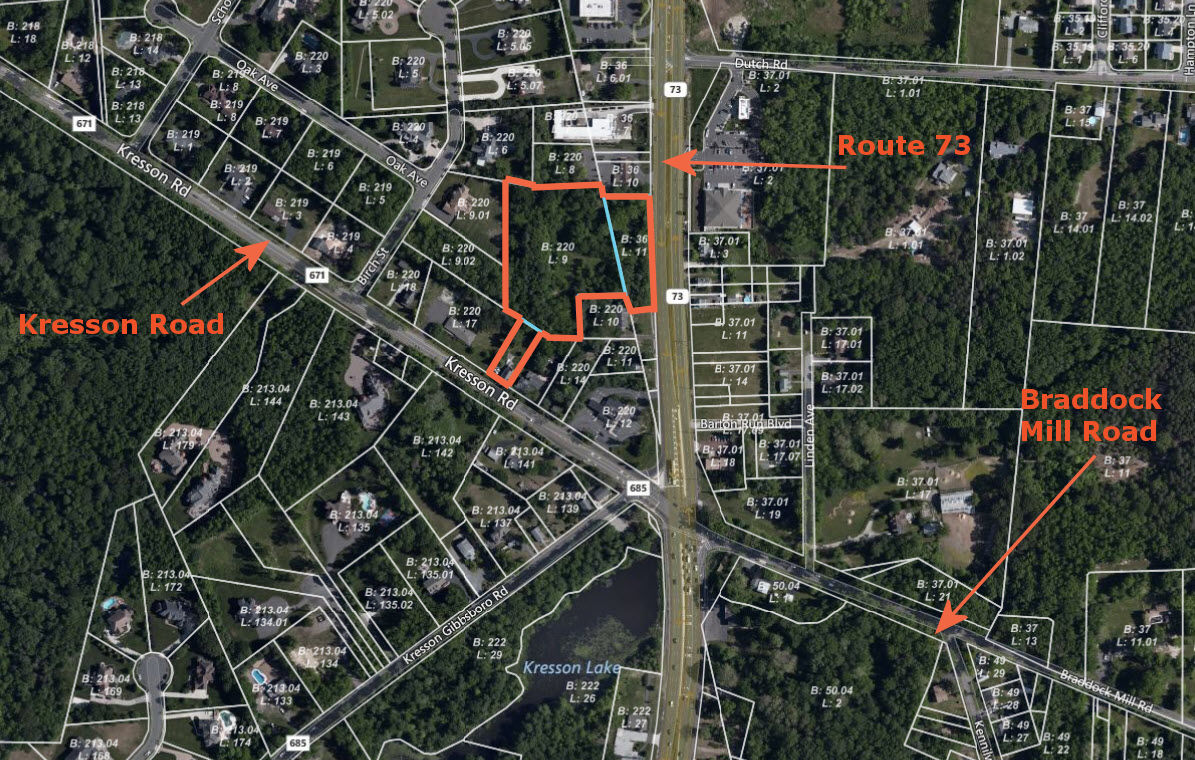 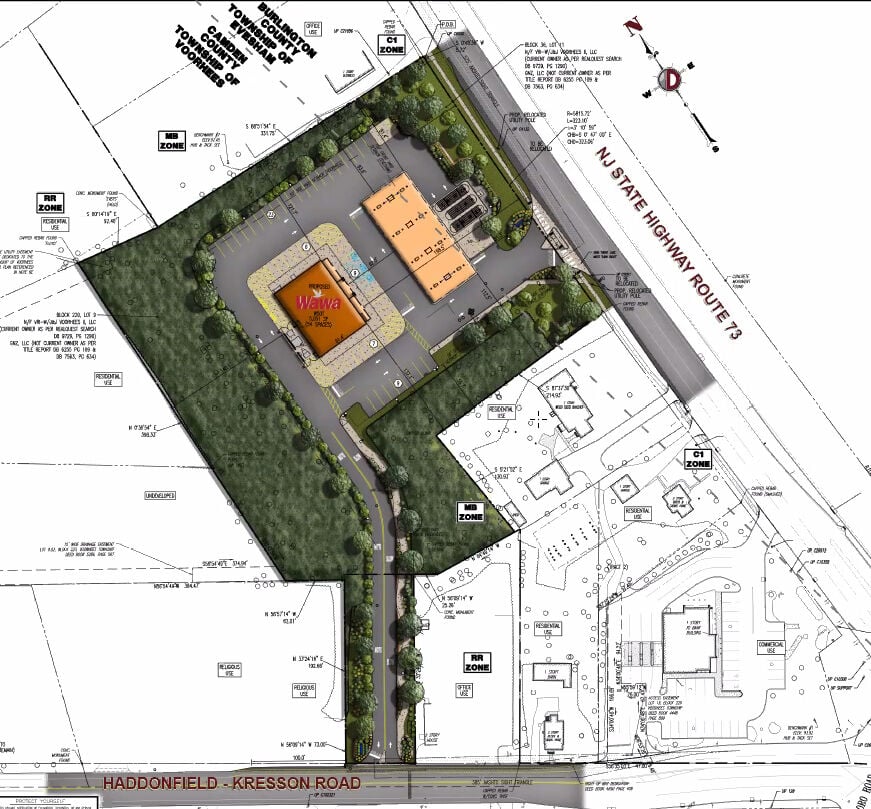 The driveways on the southbound side of Route 73 would be right in and right out only. The driveway on Kresson Road could be entered from both lanes but exiting would be a right-hand turn only. TD Bank is in the lower right.

Neighbors in Voorhees protested plans for a new Wawa super store near Route 73 and Kresson Road at a zoning board meeting on Thursday night, saying Wawa will make an already unsafe intersection even more dangerous.

"I just can't imagine more traffic," said Heather Furey, who lives on Kresson Road near the intersection and has three school-age children. "The intersection is already bad."

The focus of the Zoning Board of Adjustment testimony by residents who live near the proposed Wawa was an entrance-and-exit driveway planned for Kresson Road, not far from the intersection. The driveway would allow customers to enter from either lane on Kresson Road, but exit by making only a right turn.

The intersection at Kresson Road and Route 73 is a complex one, with Kresson Gibbsboro Road also branching off.

Testimony wasn't completed Thursday night, so the zoning board will hear more about the application at the July 8 meeting before a decision is made on granting variances.

A now-wooded and landlocked lot is at the center of the site. The main Wawa driveway would be a right-in and right-out drive on the southbound lanes of Route 73. A home on Kresson Road would be demolished to make way for the second driveway on Kresson Road.

Most of the 4.16-acre site is in Voorhees, but a small part fronting Route 73 is in Evesham. In 2018, plans for a super Wawa and a Tractor Supply store at the site sparked neighbor protests and failed to pass the Planning Board.

"I fear for the safety of all the children that are there, but that's not caused by the Wawa," board member Neal Cupersmith, who chaired the meeting, said of the intersection and nearby neighborhood.

Dr. Anthony Smeglin, who lives on Birch Street abutting the Wawa site, said he has lived there since 2013 and getting into and out of his street is a problem even without the Wawa next door.

He said that the safety concerns were "being minimalized" in the hearing. Smeglin said many drivers already use his street to turn around on Kresson Road and that would increase because a left-turn exit would not be permitted from Wawa onto Kresson Road.

"I would like one board member here to look me in the eye and tell me why, other than corporate greed, there needs to be an entrance and exit way on Kresson Road," he said.

One of Smeglin's Birch Street neighbors, Dr. Lewis Horvitz said: "The neighborhood is in jeopardy."

"That intersection is already horrible for a car," said Glenn Sloves of Chipley Run. Sloves said he is a cyclist and Kresson Road is a "major thoroughfare for cyclists."

Pamela Rafter, who lives nearby on Kresson Gibbsboro Road, said the driveway onto Kresson Road would not be safe. "I don't want a new intersection with new problems on Kresson," she said.

Lawyer Howard Sobel, whose law office is on Kresson Road near the Wawa site, told the board that insufficient information about the Wawa project was released to the public. He said some documents key to the application were not available on the Township's website. Some of the information he did get, such as the site plans, had pages cut off on the PDF, he added.

"It's not about me. It's about the people who are interested," Sobel told the board.

Voorhees Route 73 Development Group LLC applied for the zoning variances and preliminary and final site-plan approval. The landlocked lot and the lot fronting Route 73 in Evesham are owned by VRI-W-J&J Voorhees II LLC, which lists the same address at 701 Route 70 East in Evesham as the applicant. The home and lot at 505 Kresson Road are owned by Walter Heil and Bobbi Jean Heil.