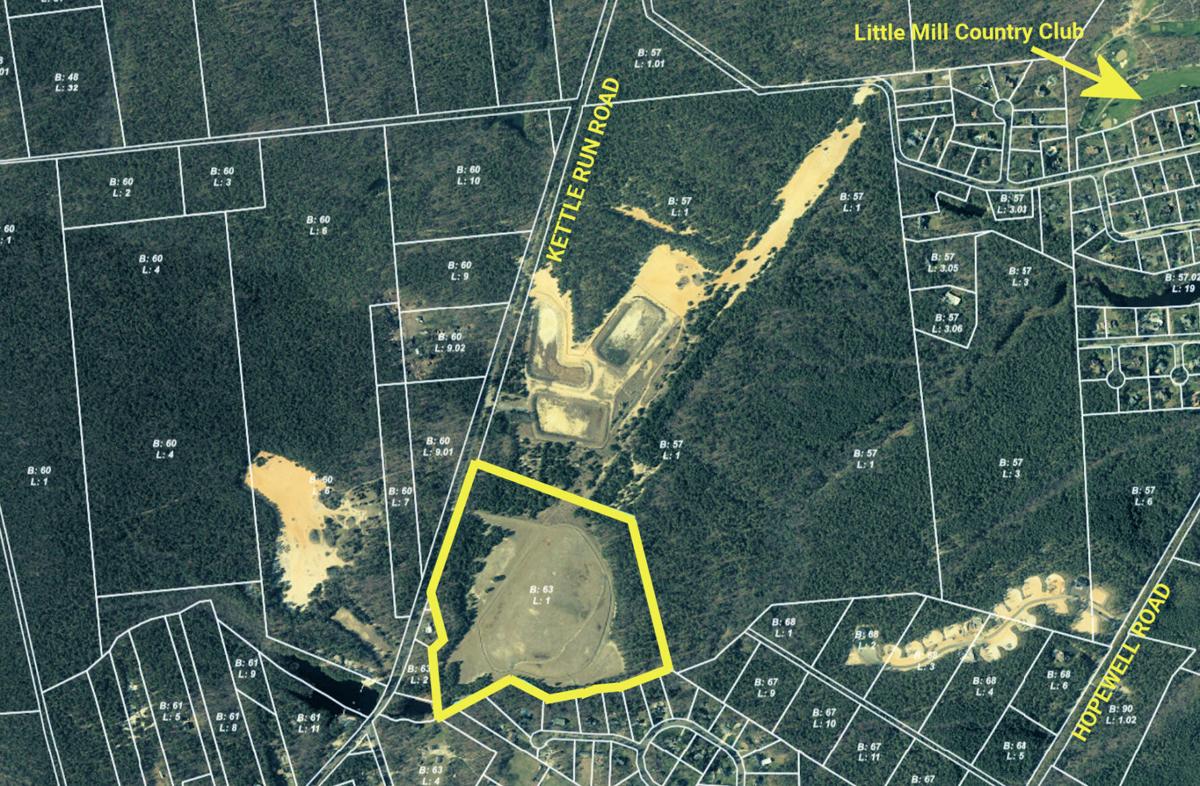 The yellow border shows the area for the solar installation. The area will almost be covered by solar panels, according to the proposal. The neighboring property (Block 57, Lot 1), to the north, also was part of the airport and now is owned by Evesham Township for recreational space. To the north of that, but not on this map, is the Black Run Preserve. 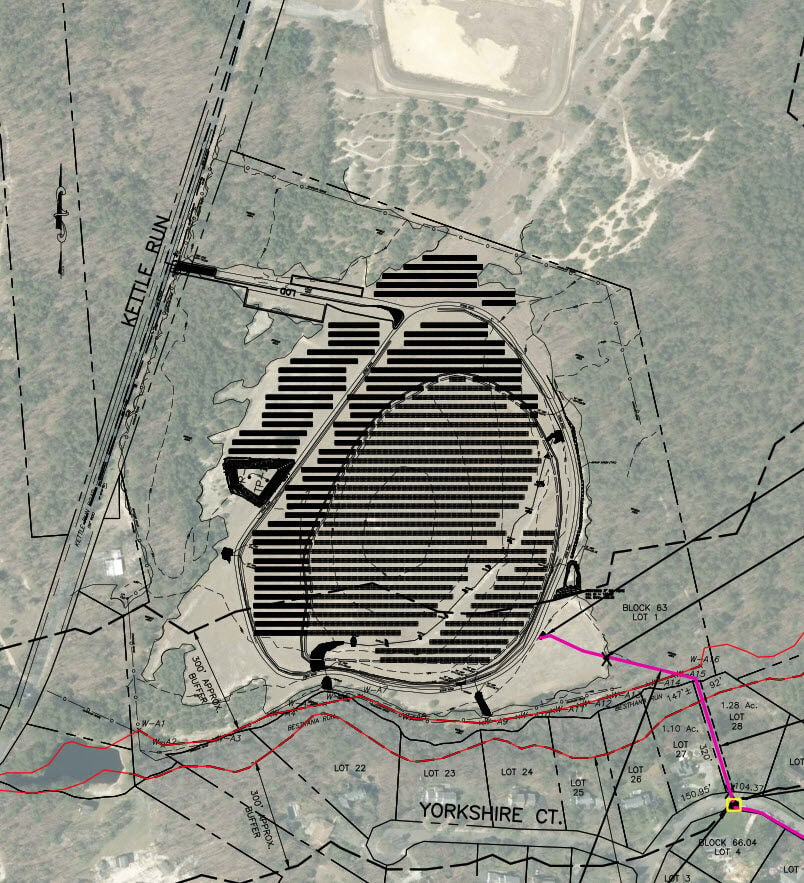 Clean Energy Ventures' plans show the location of solar panels on the property. The panels to be added to the project are the "banana-shaped" group at the lower right of the drawing. 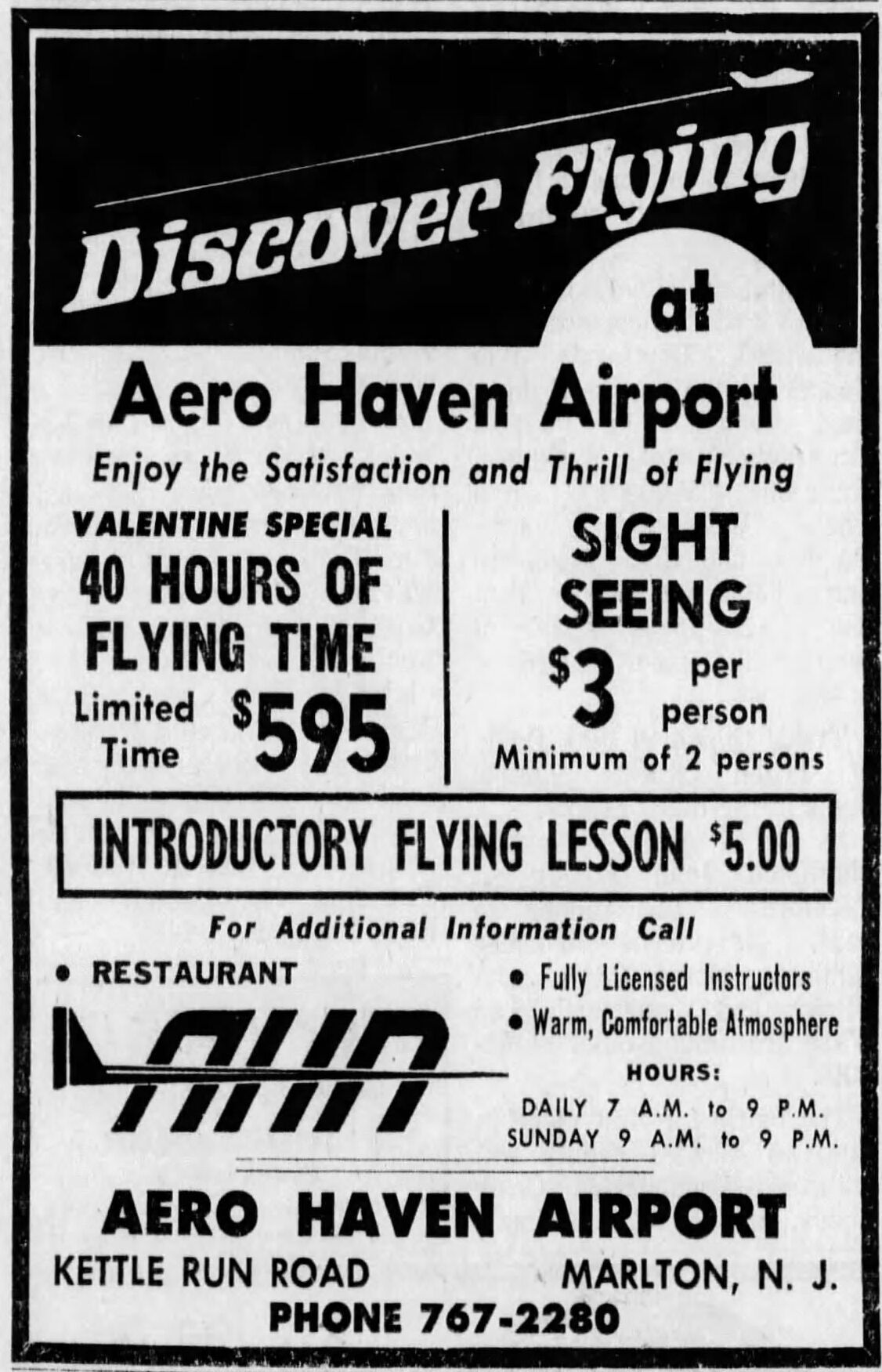 In 1970, you could hop in a plane at Aero Haven and go on a sightseeing tour of the area for $3 per person. 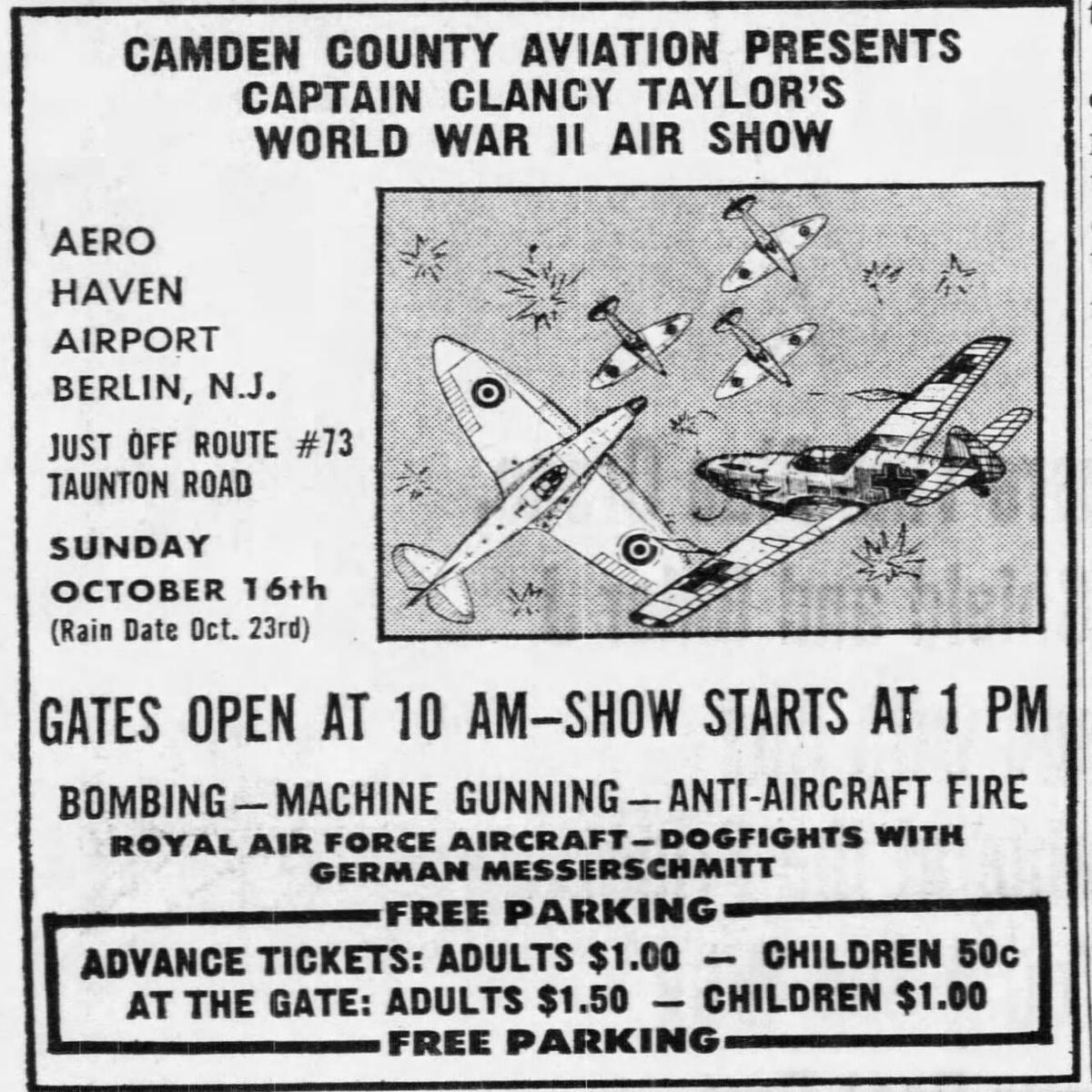 The acreage coverage of this project was misstated in a previous version of this article.

A solar energy developer that two years ago got Evesham Township's permission to build a solar energy array on part of the old Aero Haven Airport now proposes revising its plans for the site.

NJR Clean Energy Ventures III Corp., part of New Jersey Resources, is scheduled to appear before the Planning Board on January 20 to amend its proposal, which was approved in October 2019 for the 450 Kettle Run Road property.

"Once complete, the Aero Haven solar array will produce 3.38 megawatts of clean energy. The application CEV filed does not change the size or scope of the project, but rather would allow CEV to reconfigure the layout of the solar panels to better utilize the capped landfill space," Michael Kinney, New Jersey Resources corporate communications director, told 70and73.com in an email.

» More information on the January 20 Planning Board meeting.

New Jersey Resources, based in Wall, Monmouth County, had $2.16 billion in revenue in its latest fiscal year and is the largest solar owner-operator in New Jersey, according to its 2021 annual report.

New Jersey Resources' Clean Energy Ventures unit has $1 billion invested in 53 commercial solar ventures, 9,700 residential solar customers and produces 367.8 megawatts annually — enough to power more than 56,000 homes, according to the annual report. The regulated side of the business is New Jersey Natural Gas, which serves more than a half-million customers in Burlington, Monmouth, Ocean, Morris and Middlesex counties.

The 47-acre Evesham site neighbors the rest of the former airport, consisting of more than 200 acres of vacant land owned by Evesham Township and designated as open space. Evesham has no immediate plans for the property, which abuts the Black Run Preserve, according to Zane Clark, the Township's director of public information.

Owens Corning Sales LLC of Toledo, Ohio owns the property that would house the solar array. Owens Corning bought the site in 1986 to conduct an environmental clean-up of 50,000 cubic yards of Kaylo pipe insulation, which contains asbestos, according to press reports at the time. The Kaylo, dumped at the Aero Haven Airport as fill, now is buried in an 11-acre landfill on the property.

In 2019, some neighbors told the Planning Board they were concerned about the solar project upsetting the landfill cap.

Rhyan Grech, policy advocate for the Southampton-based Pinelands Preservation Alliance, also testified in 2019 before the Planning Board, expressing concerns about nearby wetlands and wildlife habitats.

"What we would like to see is comprehensive evaluation and surveys of this site to make sure none of those threatened species would be adversely impacted by this project," she told 70and73.com in a telephone interview this week. She said the species include the northern pine snake, the timber rattlesnake and the barred owl.

The Aero Haven project is one of several on closed landfills in the Pinelands — areas where the sites have been previously disturbed, Grech said.

Aero Haven Airport was dedicated in 1961 and had a troubled financial history. In 1967, it was sold at a court-supervised auction to a Philadelphia real estate developer for $257,000, according to press reports. At one point, developers viewed the airport as the centerpiece of a large industrial park.