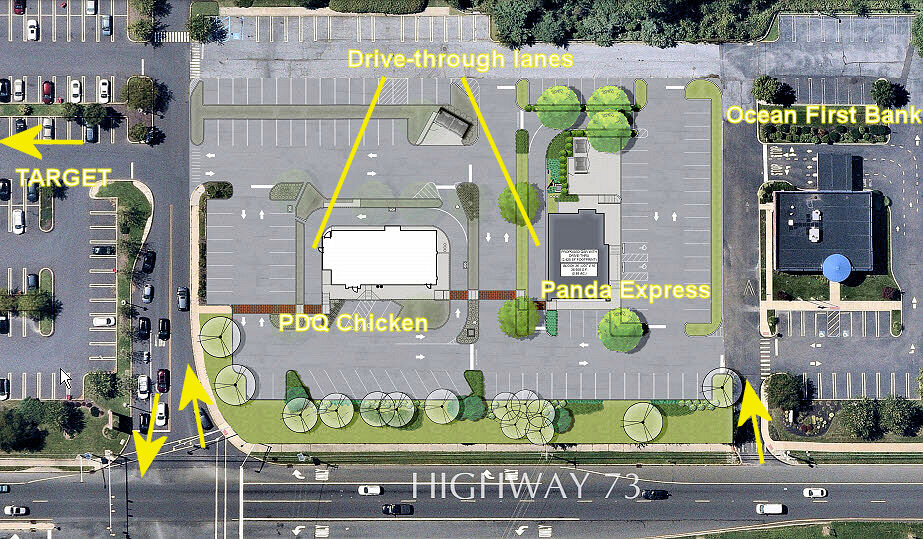 The PDQ Chicken restaurant, on the left, now is being built on Route 73 in the Target parking lot. The Evesham zoning board on Monday night approved the Panda Express, on the right. Each has a drive-through lane. 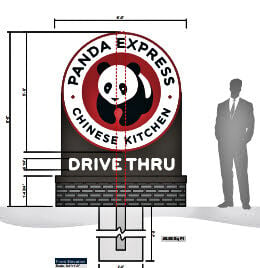 Despite concerns about two adjacent restaurants with drive-through lanes, the Evesham Zoning Board of Adjustment on Monday night approved a new Panda Express restaurant at the far end of the Target parking lot on Route 73.

The board voted 5-2 in favor of variances and site plans for the restaurant. At least five "yes" votes were needed. Michael Thompson, Rochelle Thomas, Patrick Carragher, Curtis Fox and Ryan Paetzold all voted in favor. Voting against were Chair Sandy Student and Robert Osno.

But some looked askance at having two drive-through lanes on neighboring sites. The other is a PDQ chicken restaurant now under construction.

"I know in our town or in adjacent communities of no other small parcel less than two acres that has two drive-throughs immediately adjacent to each other," Student said during the deliberation.

Student asked Panda representatives if its estimate of average drive-through waiting time of 3½ minutes was pre- or post-pandemic. The company representatives did not know.

The board chairman said estimates now suggest drive-through wait times at Kentucky Fried Chicken to be five minutes and more than eight minutes at Chick-fil-A. He said the pandemic has meant that 70% of McDonald's business is drive-through.

"The worst complaints from residents in our community is traffic and this stretch of 73 from Evesham Road south is probably the worst stretch in town," Student said.

Stacey Arcari, the zoning board's traffic engineer, said her "biggest concern" was the two-way drive aisle for parking as well as feeding the drive-through lane. She had recommended in her review letter that the aisle be reduced to one way from two way. Arcari works at Environmental Resolutions Inc. of Mount Laurel.

"I think if people are in any way paying attention when they're driving around or in a drive-through, they will realize that most drive-throughs overflow their drive-through lane,” Arcari told the board. "We're trying to alleviate any issues that may arise."

Larry Calli, a Morris County lawyer representing Panda, said the applicant would agree to change the two-way aisle to one-way to address the board's concerns about traffic flow.

Panda's drive-through line would be able to hold nine vehicles and statistical modeling suggested the typical number of vehicles waiting would be seven, company representatives said, based on a 3½-minute average wait.

Calli told the board that a previous zoning board approval for the site was to be a 3,800-square-foot, 156-seat First Watch, a brunch and lunch restaurant chain. The First Watch would not have had a drive-through.

"They're not coming here," Calli said, adding that First Watch no longer believes the plan is viable for one of its restaurants.

No members of the public commented on the plan at the meeting.

Family-owned Panda Restaurant Group Inc. — founded in 1983 and based in Glendale, California — operates Panda Express, Panda Inn and Hibachi-San. The company was co-founded by husband and wife Andrew and Peggy Cherng and each today is a co-CEO. The company has more than 2,100 stores and $3 billion in annual sales, according to its website.

The Evesham application was from CFT NV Developments LLC, a Las Vegas development company owned by the Cherng's.

Company representatives told the zoning board that Andrew Cherng personally approves all restaurant site plans. Panda Express' most popular menu item is its Original Orange Chicken, board members were told. Other Panda Express locations in the area include White Horse Road in Voorhees and Route 38 and Cuthbert Boulevard in Cherry Hill.

The restaurant now being built is a PDQ chicken restaurant. The name stands for People Dedicated to Quality, according to PDQ's website. The chain opened its first store in 2011 in Tampa, Florida. Other PDQ locations in the area include Haddonfield Road in Cherry Hill and Cross Keys Road in Winslow.