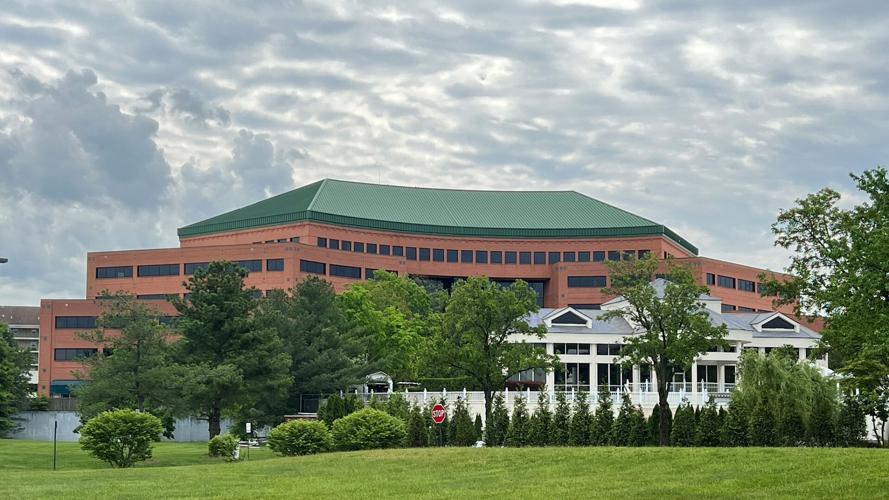 Plaza 1000, the brick-colored, and long-vacant, office building with the green roof, would be demolished under a plan to redevelop part of Main Street in Voorhees. The Mansion on Main Street, a popular wedding and events venue, is the white building in front and would remain. 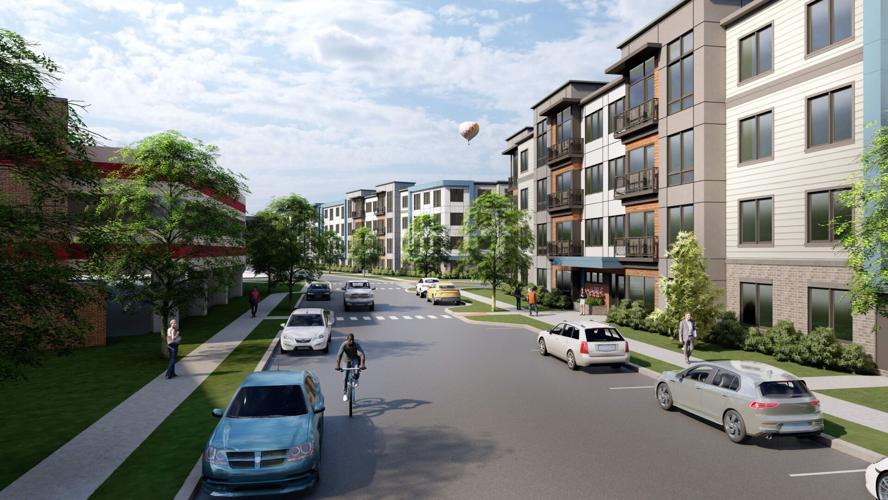 Rendering of the one- and two-bedroom apartments at Main Street in Voorhees.

Rendering of the apartment project that will replace the huge office building.

Approvals to demolish the iconic green-roofed, six-story vacant office building in the Main Street complex in Voorhees and to build 280 apartments were postponed again Wednesday night over concerns about adequate parking.

Members of the Voorhees Planning Board voted to move a decision on the plan by Brandywine Plaza 1000 LLC and Brandywine-Main Street LLC to the September 28 meeting.

The application had been heard at the May meeting and continued to this week also because of parking concerns.

Lawyer Robert S. Baranowski Jr., of the Hyland Levin Shapiro firm in Marlton, told the board the developer has added 160 parking spaces for the Mansion on Main Street catering venue and 116 spaces for the Congregation Beth El synagogue to its plans for the site.

Changes to the plans mean 1,916 spaces are proposed on the site, which now has 1,783 spaces. Ordinarily, 1,965 spaces would be required. But Baranowski, the developer's lawyer, said a Township redevelopment plan for the Main Street space requires no changes in parking.

At issue is the free, unrestricted, shared parking throughout Main Street — from two parking garages to several lots.

"There are a lot of unknowns about the parking," said board member Andrew Schallenhammer, calling for the application to be tabled. "The parking is the biggest concern of this whole project."

Several Main Street condominium residents contended that parking from commercial tenants, the new apartment residents and even a Cooper University Health Care facility across the street would affect their parking and, ultimately, the value of their homes.

Parking in the two garages and who would pay for needed garage improvements worried Linda Fossi, a 22-year resident of the Piazza Main Street building.

"This is ruining the value of these units at Main Street," she told the board. "Eventually it is going to become a ghost town."

Lawyer Jay Ruder, representing Congregation Beth El, told board members that synagogue officials have had "fruitful discussions" with Brandywine, but stressed that the congregation's board of trustees has yet to approve the parking plans.

Rubin said he wanted to voice concern of the Mansion's owners, adding that the developer had not approached them to ask how many events are held each year and how often valet parking is offered. He said that because the new parking is relatively far from the Mansion, valet parking may have to be increased.

"The biggest reality is the parking," said Dominic Simeone, a lawyer from Simeone & Raynor of Cherry Hill, representing owners in the Piazza and Promenade sections of Main Street.

"This is going to be a parking free-for-all," he said. "We're going to have a real mess on our hands."

One wrinkle that was first disclosed at Wednesday's meeting was a Brandywine agreement with the Cooper health facility across the road from the complex.

The Plaza 1000 office building has been vacant since at least 2016, freeing up parking. Brandywine signed a lease with Cooper to permit the health care provider 150 parking spots in one of the Main Street garages.

Anthony Ziccardi of Brandywine told the board that the Cooper lease would be canceled.

However, because Main Street has no restrictions on parking, some were concerned people connected with Cooper would continue to park in the garage.

"Where are those 150 people going to go park?" Simeone asked.

As they did at the May meeting, board members asked extensive questions about parking spaces, agreements with the Mansion and the synagogue and how parking at the complex might be regulated.

Board member Mario DiNatale said that, at best, there exists a "misunderstanding" about parking for the proposed project.

"I'd rather have a bird in the hand and not have to take their word that they'll complete certain things," he said of Brandywine's proposals.