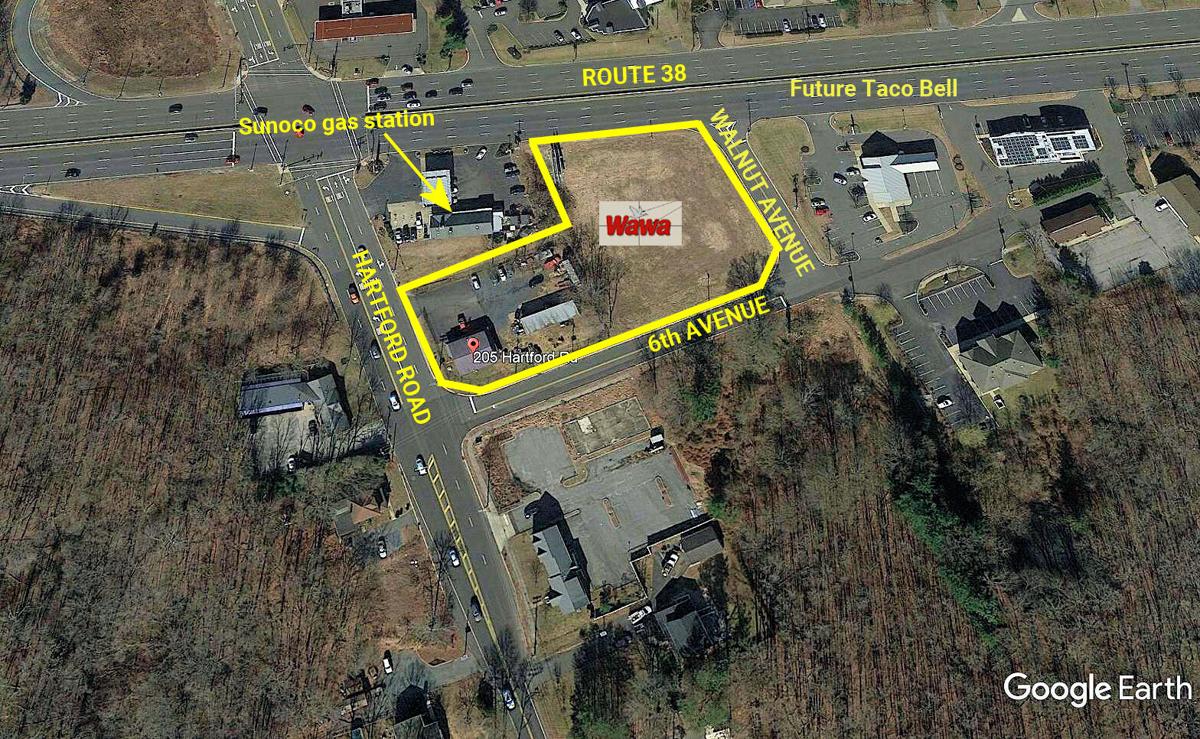 The front of the Wawa, above, would face Route 38.

Wawa opened about 2½ miles away on Route 38, and a Royal Farms was built about a half-mile in the other direction on the busy route.

And now Wawa is proposing another outlet — as the Sunoco's next-door neighbor, hemming in the station at the corner of Route 38 and Hartford Road. The Mount Laurel Zoning Board of Appeals is scheduled to consider Wawa's application on December 2.

The first that Wilson, owner of Stiles Sunoco, heard of the plan was an article on 70and73.com's news website, he said.

"It hurt when they (Wawa) opened on the other side of (Route) 295," Wilson told 70and73.com in a telephone interview on Saturday. He said having Wawa abutting his station would "devastate" the service station, which first opened in the 1940s. Wilson took the business over from his father-in-law about 11 years ago.

The corner property is owned by Dallas-based gasoline giant Sunoco LP and leased by Wilson. He said his business, which has nine employees, would not be able to survive on revenue from service alone. He already has had to close another location at 721 South Church St. in Mount Laurel. His Route 38 station used to operate 24 hours a day, but increased competition forced him to cut the hours to 6 a.m. to 10 p.m. daily.

"They have been on that corner for years. It's not right," one woman said in a post on the Moorestown Facebook page. "There are other Wawa's nearby and stations galore. Mount Laurel needs to protect the existing businesses in that area, not make it so they have to struggle to survive. Do the right thing Mount Laurel."

By mid-afternoon Saturday, a post of the 70and73.com story on the Mount Laurel Facebook page had drawn 166 comments, with many worried about the future of Stiles Sunoco.

"I love me some Wawa, but I think we have enough. No matter what, I'll...go to Stiles Sunoco. They've been a wonderful business in Mount Laurel for years," one woman wrote on the Facebook page.

Another wrote: "Enough already, the Sunoco is owned by friends of mine. They already had to close one station. Small businesses need to thrive. It's the heart of the community."

"Sad that family has owned that gas station for over 50 years and they will be forced to sell or just have as a mechanic shop....I pray for you, Shawn," another member of the Mount Laurel page wrote.

One poster shared insight into how municipal zoning and planning boards work. "There are a ton of comments in this thread about getting the Township to say no to Wawa building on this lot and that's not the way things work," he said, pointing out that if the developer can make a case for variances the board members' hands are tied even if philosophically they are "completely against" the idea.

In the Wawa application, Laurel 38 Developers LLC seeks approval for variances for the 1.67-acre property at 3230 Route 38 and 205 Hartford Road.

If approved, the new, 4,736-square-foot Wawa would be less than a mile from a 500-unit housing development now under construction on 65 acres along Marne Highway and Hartford Road, the site of the former Monte Farm. A Taco Bell restaurant on the lot that held a former Beneficial Bank next to the proposed Wawa site on Route 38 was approved at a Planning Board meeting on March 12.

The Macro Equipment Co. building on Hartford Road would be demolished. Wawa would build on that lot and adjoining wooded vacant lots.

William R. Long of Richard A. Alaimo Associates of Mount Holly, the consulting engineer for the zoning board, wrote in a June 22 letter to the board that the project needs several zoning variances from the board. Among the variances: