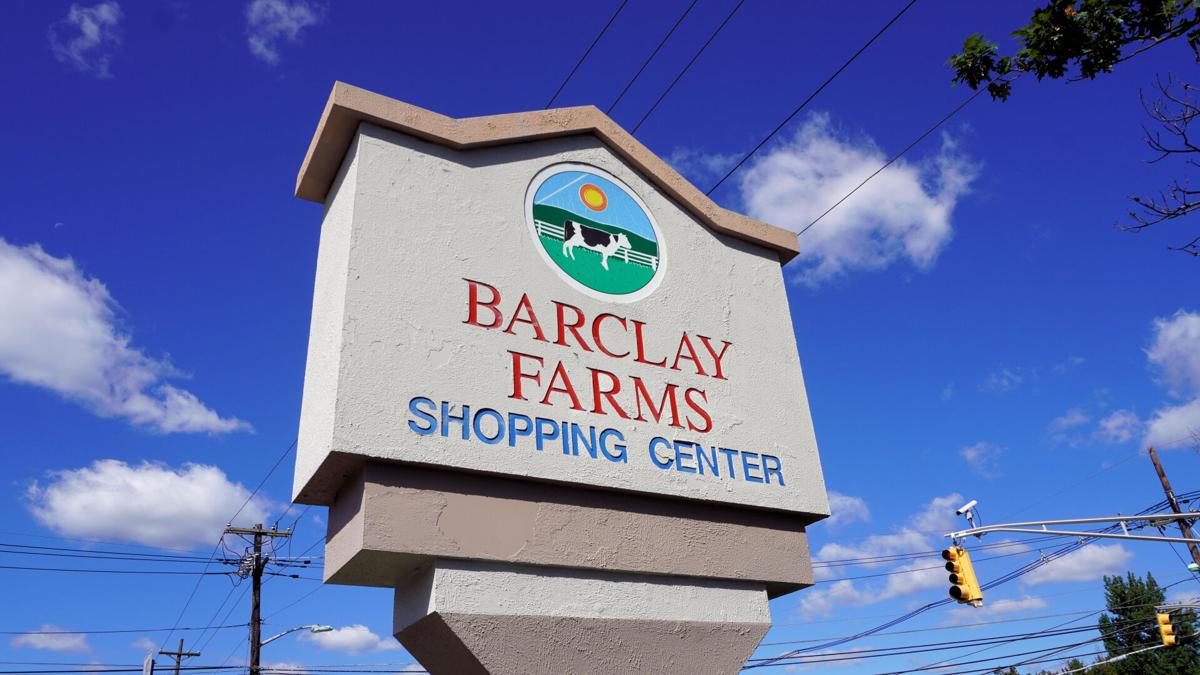 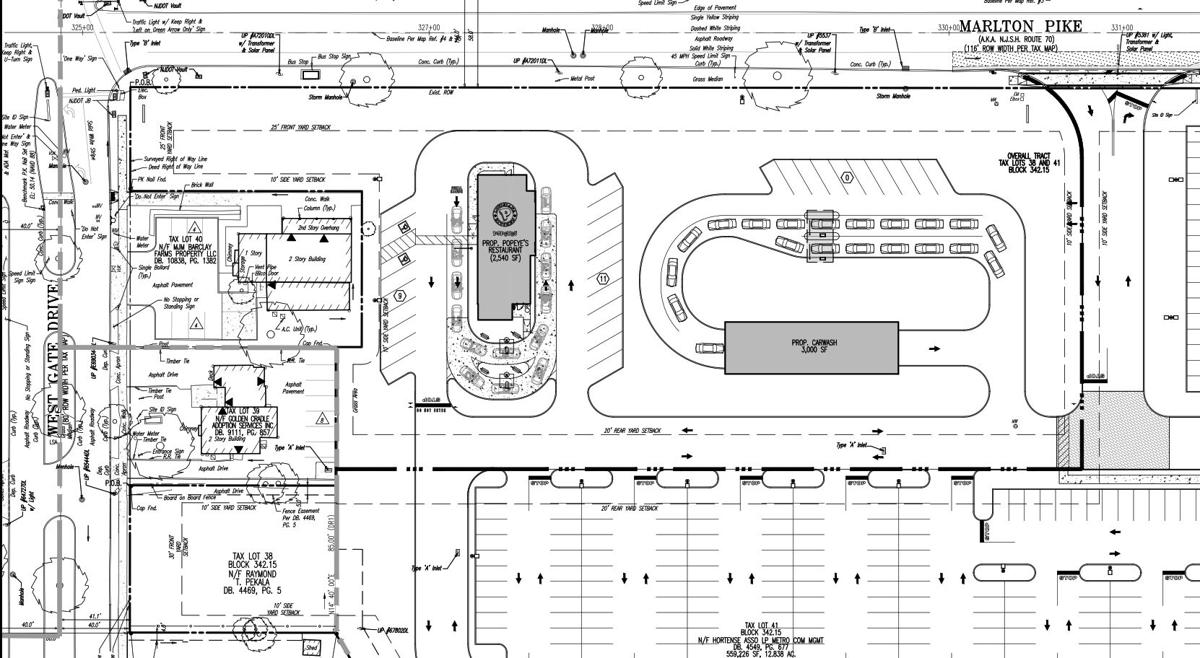 A Kaiserman Company Inc. plan that would eliminate a Super Wawa would include instead a Popeyes fast-food, drive-through restaurant and a car wash. No green space would be set aside for the community on the current site of the Barclay Pavilion office building. It would be used for retail development, as original plans showed. However, a driveway from the shopping center to West Gate Drive would not be part of the plan, as it is with the Super Wawa proposal. 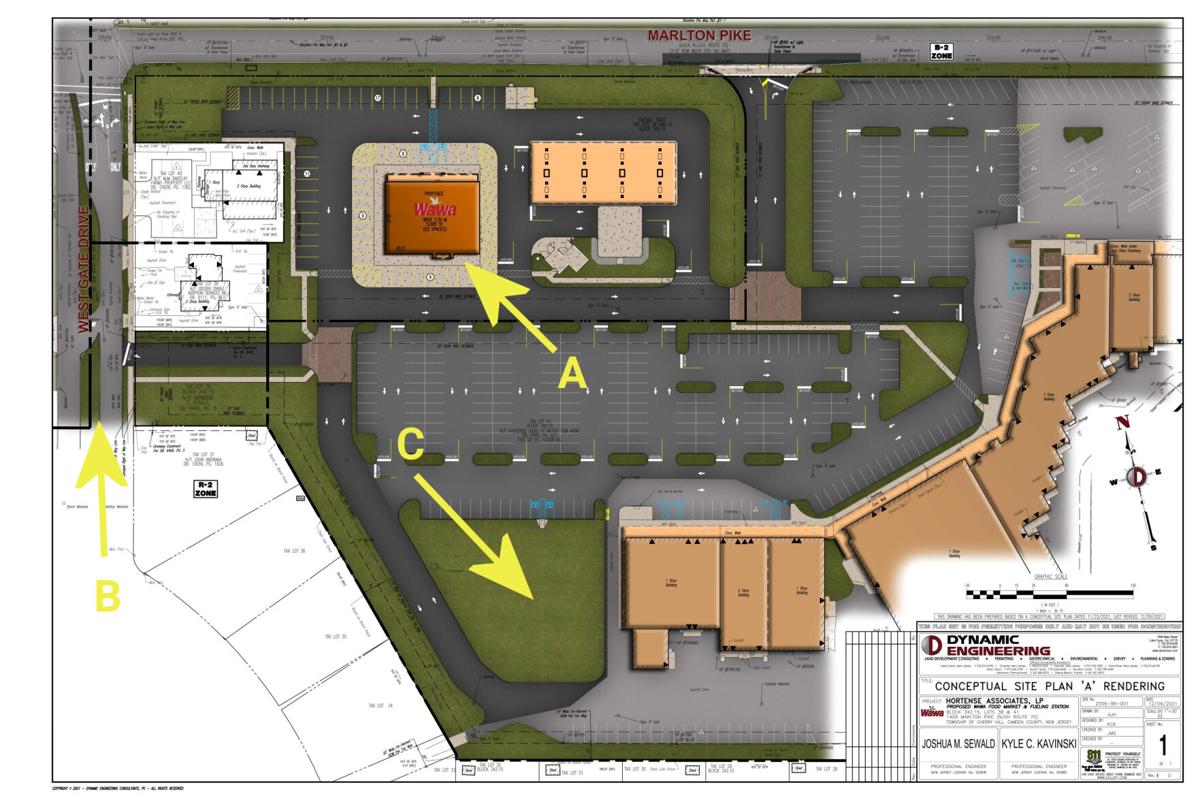 A revised plan presented to the Preserve Barclay residents organization by representatives of Kaiserman Company Inc., the owner of the Barclay Farm Shopping Center, shows (A) the positions of the Wawa store and the gasoline pumps would be flipped so the fueling stations would be farther away from residences, (B) the median leading into the Barclay Farm development would be retained, although it would be thinner and (C) the Barclay Pavilion office building would be demolished and green space for community use would be provided. The proposed driveway from the shopping center to West Gate Drive would now be an exit only, which would prevent customers from driving through the Barclay Farm neighborhood. Kaiserman originally was going to use the Barclay Pavilion site to add retail space.

Revised plans for the development of the Barclay Farm Shopping Center in Cherry Hill have been presented to the Preserve Barclay residents organization, which has protested a Super Wawa planned for the northwest corner of the center.

The citizens group has been meeting with representatives of center owner Kaiserman Company Inc. of Philadelphia to make development of the Route 70 site more acceptable to neighbors. The continuing negotiations come long before the proposal goes to the Cherry Hill Planning Board, which is expected in February.

Preserve Barclay is hosting a virtual meeting on Tuesday night at 7 to present the proposed changes and other options.

A revised Super Wawa plan would swap the site of the store with the gasoline pumps so that cars would be filled toward the middle of the parking lot, rather than near residences.

But, instead of building retail space on the Barclay Pavilion site, Kaiserman would dedicate it as green space to be used by the community for farmers markets and other events, Martha Wright, the spokesperson for Preserve Barclay, told 70and73.com on Monday evening.

The revision also would include a redesigned — and not eliminated — Barclay Farm median at West Gate Drive and Route 70. A driveway planned from the center to West Gate Drive would be an exit only and designed to force cars to go to Route 70 rather than turning left into the Barclay Farm neighborhood, Wright explained.

Another option presented to the community group by Kaiserman, which operates the center as Hortense Associates LP, would completely throw out the Super Wawa plan.

Instead of a Wawa, Kaiserman would build a Popeyes fast-food restaurant with drive-through lanes and a car wash on the site that would have been the Super Wawa.

However, the green space set-aside in the revised Wawa plan does not appear in the Popeyes proposal. The former Barclay Pavilion site would be used to add retail space to the shopping center, as originally planned, Wright said.

Under the Popeyes proposal, a house on West Gate Drive would not need to be demolished because no driveway would be added between the center and West Gate Drive.

All of the negotiations have been through Kaiserman's representatives. "We are not in conversation with Wawa," said Wright, who is a Cherry Hill native, Hunt Tract resident and a community activist in Cherry Hill and Avalon, where she owns a second home.

Wright said she was not surprised by Kaiserman's willingness to work with neighbors. The opposition is vast, entrenched and vociferous, she said, so "they realize that this is not going to happen easily." About 50 residents attended the last Preserve Barclay update in October and the video of the session has been viewed 134 times, she said.

The center owner's representatives also shared its plans with the Greater Kingston Civic Association, which is across Route 70 from the proposed development, Wright said.

No one denies the owner the right to monetize its property, Wright said. Working with Kaiserman emphasizes community relationships. "It is the owner trying to make this work," she added.

Wright said a third option from the group to Kaiserman would develop the Barclay Farm Shopping Center into the "heart of Cherry Hill" as a restaurant hub and a place for the community to gather.

Two key objections to the Super Wawa, Wright said, are that it would operate 24 hours a day, seven days a week and it would add a gasoline station in Cherry Hill, where many in the community support clean energy and the need to move away from fossil fuels.

The Popeyes fast-food plan with a car wash would have two businesses that do not operate 24 hours a day and a house on West Gate Drive would not have to be razed to make way for a driveway, as the Wawa proposal requires, she said.