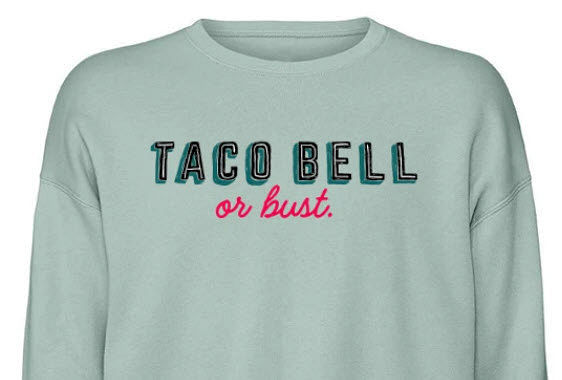 An "after and before" rendering of the Goodwill center included with the nonprofit's application to the Cherry Hill Planning Board. 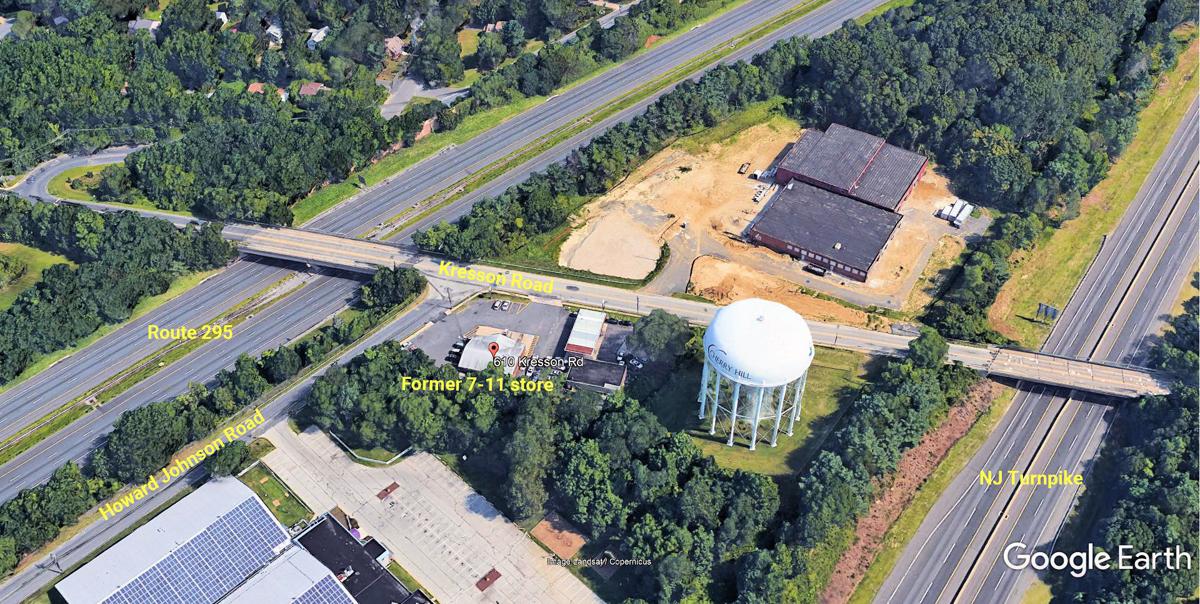 The Goodwill drop-off center is proposed in a former 7-11 convenience store at Kresson and Howard Johnson Roads in Cherry Hill. 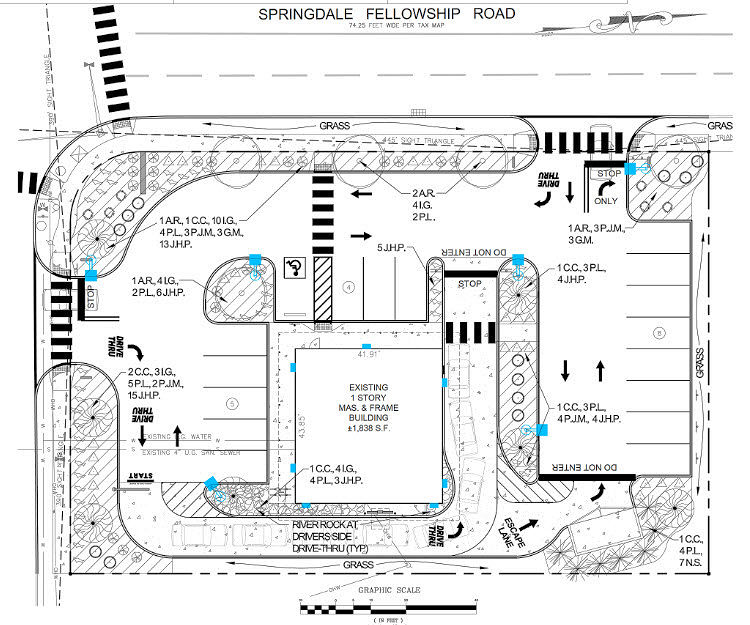 Ever get stuck in a drive-through fast food lane that couldn't be slower? Plans for a new Dunkin' on Springdale Road call for an "escape lane" just in case. 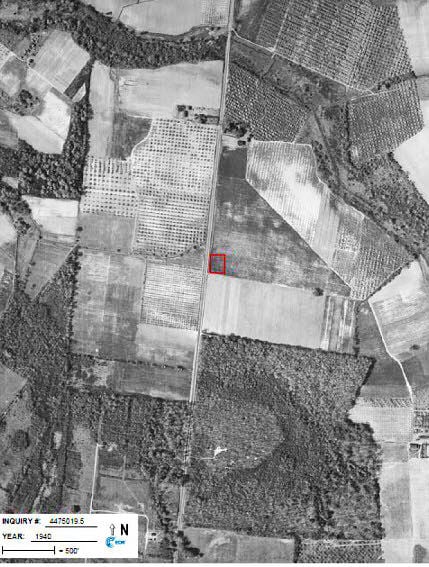 Imagine living around Springdale Road in Cherry Hill in 1940? This aerial photo shows (red square) where the new Dunkin' would go. If it were 1940, it would be surrounded by farm fields and a rather large orchard across Springdale. 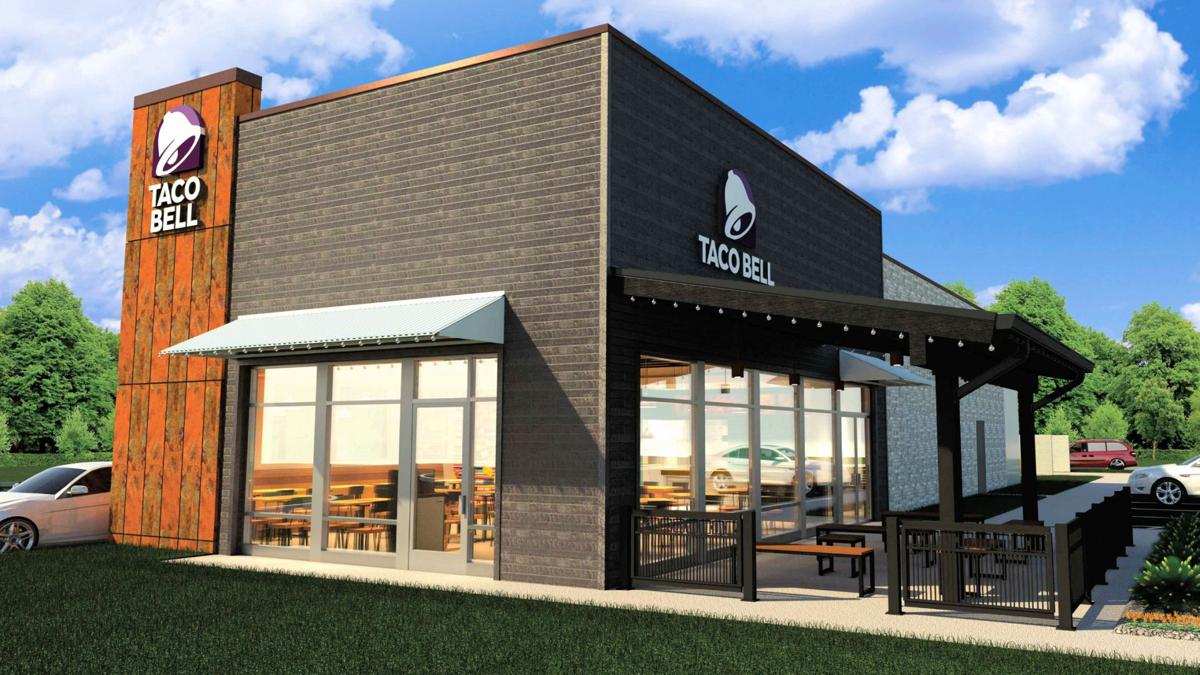 A rendering of what the proposed restaurant at the northwest corner of the shopping plaza, fronting the eastbound side of Route 70 (near Old Orchard Road), would look like. The restaurant would not have the sign on the right. 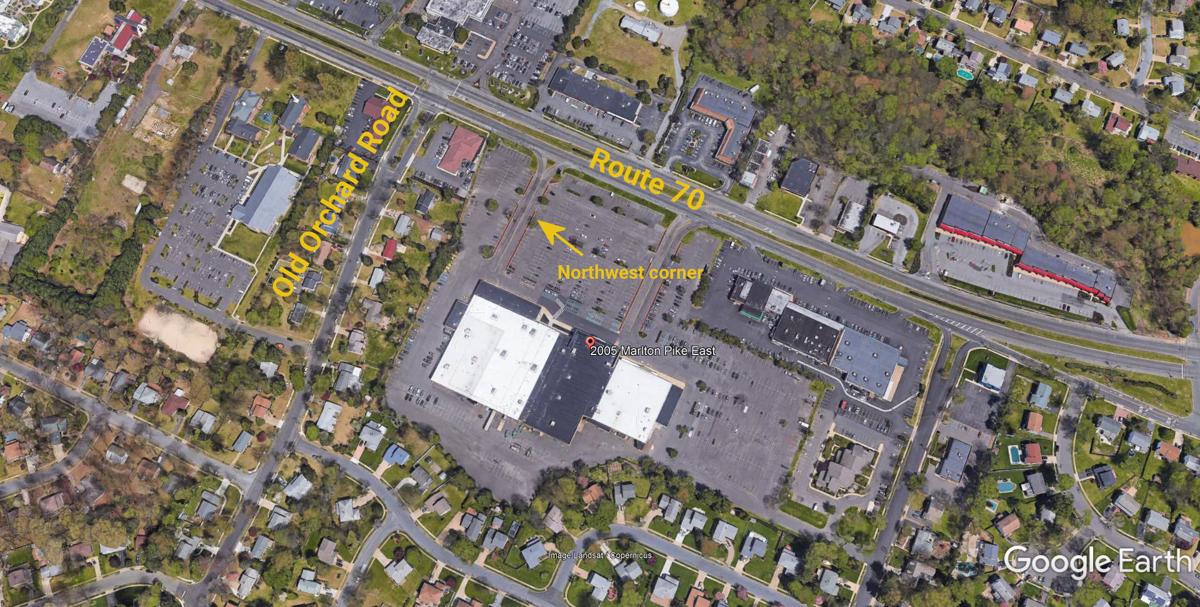 The proposed Taco Bell would go in the northwest corner of the parking lot at 2005 Route 70 in Cherry Hill. 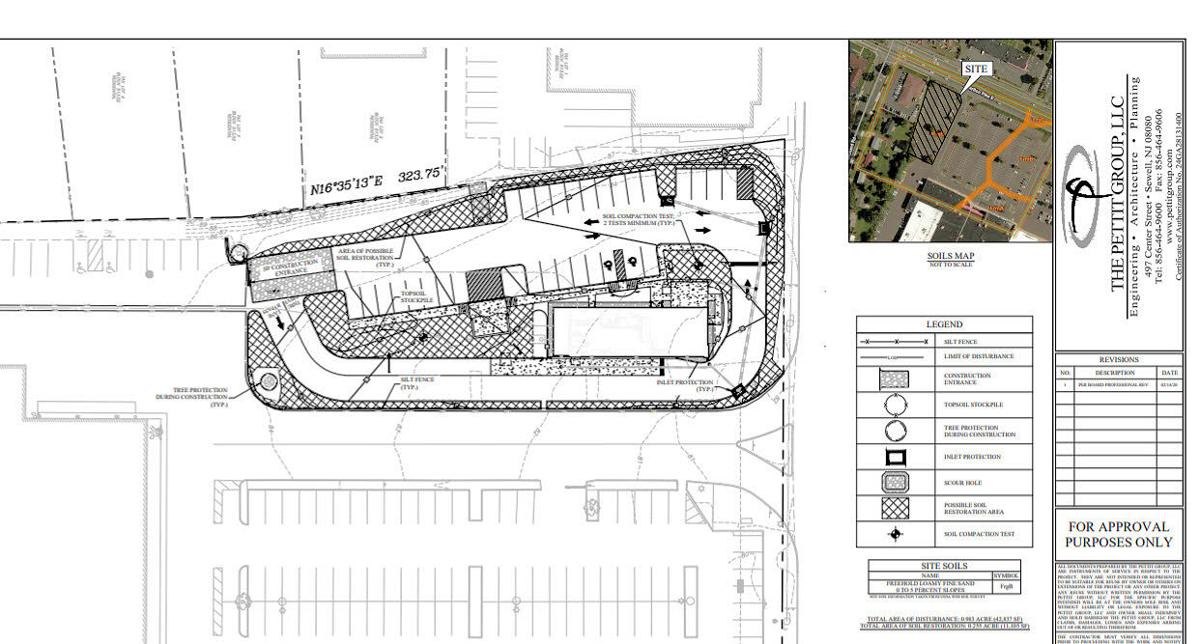 The Taco Bell would be tucked into the northwest corner of the parking lot and front Route 70. 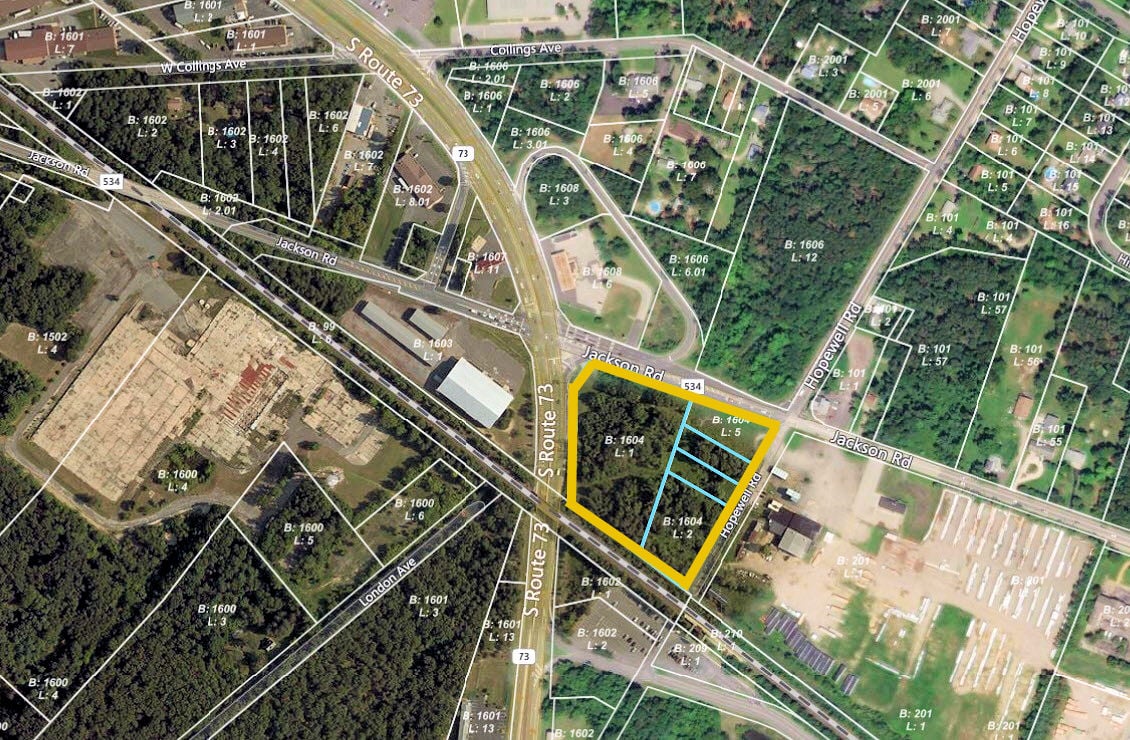 The Tractor Supply store would be on five lots at 901 Route 73 South in Berlin and Jackson and Hopewell Roads. 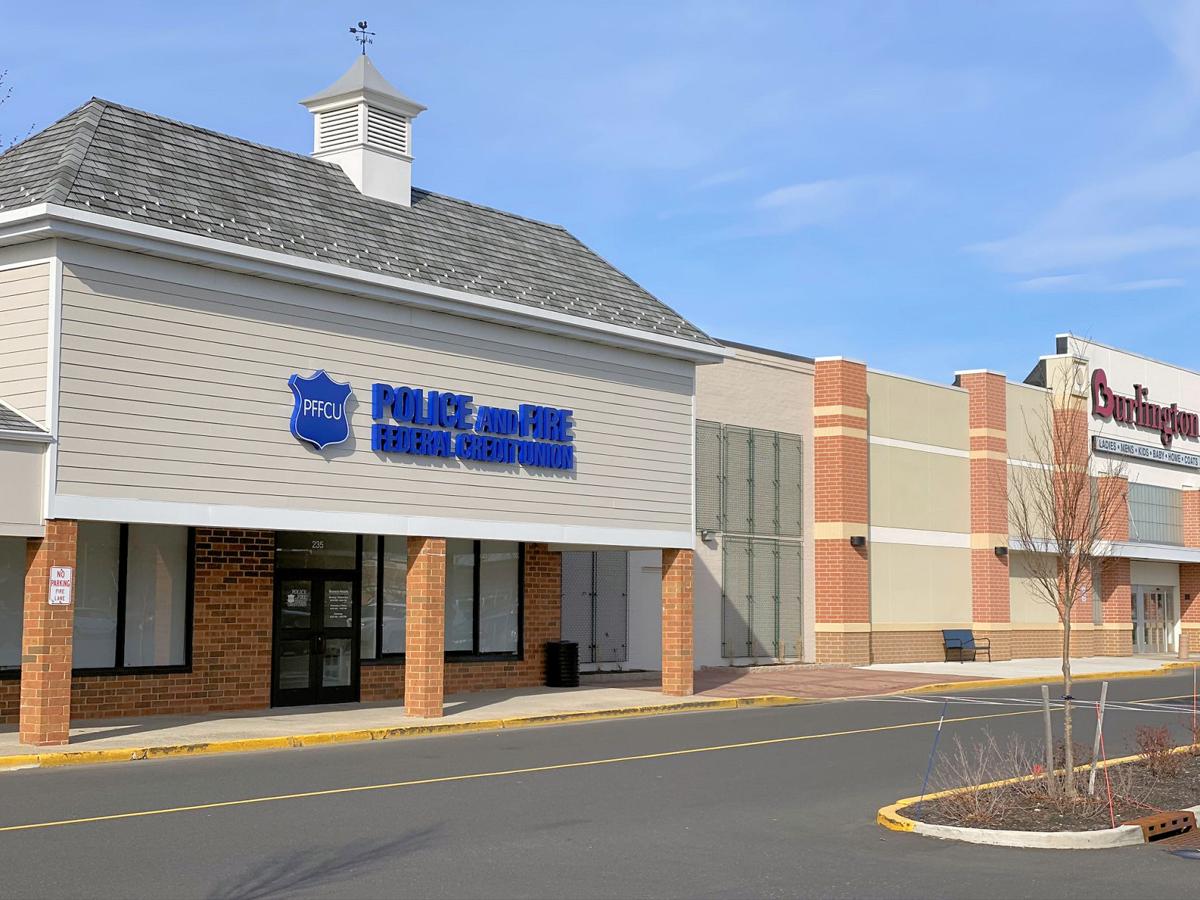 View from the southeast corner of the Marlton Crossing Shopping Center.

Rendering of restaurant/retail planned for Marlton Crossing shopping center on Route 73 in Evesham. 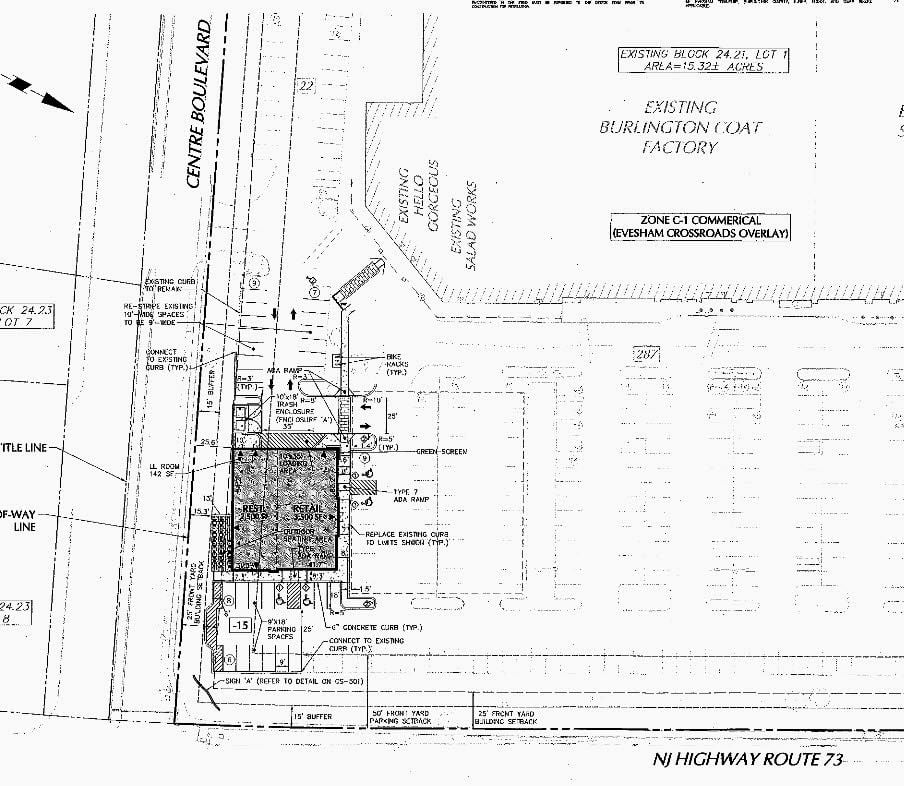 Mount Laurel Enterprise LLC's plan to demolish an existing building at 3220 Route 38, at the Walnut Avenue intersection, and build a 2,753-square-foot Taco Bell has received final approval from the Mount Laurel Planning Board.

The new drive-through restaurant will be on the south side of Route 38.

Several variances were granted, including signage, a parking lot aisle width less than minimum required and 31, rather than the required 35, parking spaces.

A Taco Bell on every corner? One was approved recently for Route 70 in Cherry Hill. See item below.

Comings and Goings is a standing feature of 70and73.com that celebrates businesses opening or expanding and mourns the closing of others. Admit it, when you continually drive by a construction site and have no idea what's going on, you're curious. We need to know if it's a new place to eat or shop. At the same time, when a business closes it often is like a long-time friend dying. We comb many sources and keep our eyes open for information. But we also prize tips from our readers. Drop an email to contactus@70and73.com and we'll try to find out more.

An attended donation drop-off center run by Goodwill Industries of Southern NJ and Philadelphia is planned in a former 7-11 convenience store at Kresson and Howard Johnson roads in Cherry Hill.

The nonprofit's application was approved by the Cherry Hill Planning Board on Monday, May 18.

An operations report from Goodwill filed with the application states: 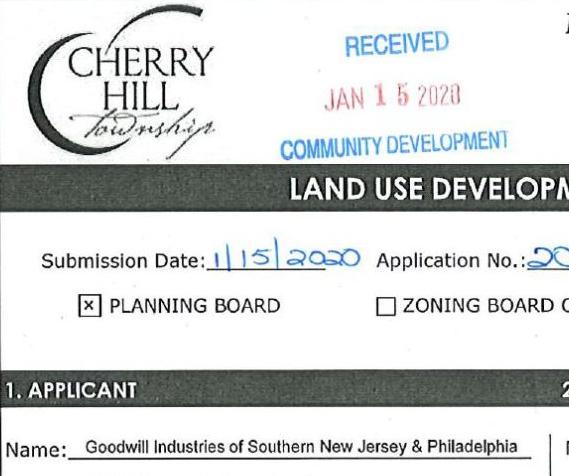 Some fast-food/coffee shop drive-through lines herd cars into a queue that you just can't leave unless you try to drive over two curbs or through landscaping.

But the new Dunkin' Donuts proposed on the site of a closed Getty gasoline station and auto repair shop on Springdale Road in Cherry Hill features an "escape lane" when construction of those macchiatos are just taking too long, according to the property owner's site plan filed with the Cherry Hill Zoning Board of Adjustment.

The owner of the property at 2061 Springdale Road in Cherry Hill has applied to the zoning board for approval to convert the site into a Dunkin' Donuts with drive-through service. The property is at the corner of Carnegie Plaza.

A current Dunkin' operating almost directly across Springdale Road in a strip plaza would move into the new facility, on the property owned by Trinetra Realty Holdings PA, Richard J. Goldstein, lawyer for the applicant, told 70and73.com. Goldstein is with the Cherry Hill firm of Hangley Aronchick Segal Pudlin & Schiller.

The property was used for agriculture until 1970 when the current gas station was built. The application says the existing building will be used in turning the property into a Dunkin'.

A traffic engineering assessment by Shropshire Associates LLC of Atco noted the development would be a relocation of the Dunkin' from across the street. "It is our experience that only a slight increase in traffic may occur from the creation of a standalone Dunkin Donuts facility compared to the existing non-standalone facility," according to Shropshire's assessment. One difference: the current Dunkin' doesn't have drive-through service.

Trinetra's plan calls for 17 parking spaces when 19 are required. Proposed distances from the driveway and right of way also are less than required by zoning rules.

The application is scheduled before the board at its virtual, teleconference meeting on May 21 at 7:30 p.m.

Preliminary plans for a drive-through Taco Bell restaurant on the northwest corner of Marlton Plaza on Route 70 near the Old Orchard development were approved Monday (May 4, 2020) by the Cherry Hill Planning Board.

"I think it's a tremendous improvement," said board member John Osorio in casting his vote in favor.

The Taco Bell will be built on parking lot space at the corner of the plaza and will face eastbound Route 70.

Several board members, the town professional staff and the developer also said the Taco Bell would improve an underused plaza, which years ago housed a Clover Department Store and Acme Market. The main businesses now are a Planet Fitness gym and a pool supply store.

New Jersey Restaurants proposes adding landscaping throughout the site, including a 25-foot buffer at the back of two properties on Old Orchard Road. Evergreen trees will be planted.

During the meeting, Del Duca said the developer would like to amend its site plan with a double drive-through lane rather than a single. The board said the amendment could be made before final site plan approval at a future meeting. Del Duca said the COVID-19 pandemic, which requires only takeout orders, has sharply increased traffic in the drive-through lanes of other Taco Bells, demand that might continue into the future.

No members of the public testified.

Tractor Supply applies for retail store on Route 73 in Berlin

Tractor Supply Company has applied for variances with Berlin Township to build a 19,097-square-foot retail store on nearly six acres of land on the east side of Route 73.

The site, composed of five lots, is bounded by Route 73 and Jackson and Hopewell Roads, according to the application with the Combined Planning and Zoning Board. The site's address is 901 Route 73 South.

A new Marlton branch of the Police and Fire Federal Credit Union will open Monday, March 16 in the Marlton Crossing Shopping Center, 237 Route 73 South (next to Burlington Coat Factory). The ribbon cutting is scheduled for 10 a.m.

Although the main market for the credit union is police and fire workers, it accepts new members regardless of where they work, said spokeswoman Jessica Mahlman.

The credit union has more than 320,000 members in the Philadelphia area and South Jersey.  It has assets of $5.56 billion, 17 branch locations and 760 employees. The credit union both takes deposits and makes loans to members.

(Updated March 12, 2020 with rendering and site map from the zoning application.)

A fast casual dining restaurant and retailer would fill two spaces in a 6,142-square-foot building proposed for the southeast corner of the Marlton Crossing Shopping Center, 101 S. Route 73 in Marlton, according to a filing with the Evesham Zoning Board.

Names of the two new businesses are not disclosed. One zoning variance sought would reduce the parking setbacks at both Centre Boulevard and Route 73 on the southeast corner.

The request for zoning variances by owner Brixmor Property Group Inc. will be the subject of a public hearing scheduled for March 16 at 7 p.m. in the Evesham Municipal Building, 984 Tuckerton Road in Marlton.

Parking and driveway configurations also would be modified under the plan and a freestanding sign would be erected, according to the filing.

Another of several variances would address the maximum impervious cover of the property. The maximum is 70%, but Marlton Crossing now covers 78.4%, an existing non-conformity. The addition of the building would raise the cover to 78.8%.

New DD gets okay from Cherry Hill Planning Board

The Cherry Hill Planning Board on February 18, 2020 granted variances for a drive-through Dunkin' Donuts in a former drive-through bank building in Woodcrest Shopping Center, 1490 Haddonfield-Berlin Road, Cherry Hill, according to a legal notice.

Owner Atlantic Region Food Corp. proposed the site plan changes to the board.

Ten South Jersey Wendy's restaurants, including two in 70and73 Land, have been sold, reports the Philadelphia Business Journal.

Rollie's Pharmacy on Cross Keys Road in Berlin is shutting down

Rollie's Pharmacy at 128 Cross Keys Road, Berlin, is going out of business, according to a legal notice.

The shutdown is effective March 6, when prescription files and records will go to Adler's Pharmacy, 100 Dobbs Lane, Suite 205, Cherry Hill, the notice stated. Adler's can be contacted about the files after March 6 at 856.685.7440.

Outlet in Grindstone Restaurant would be extension of Coda Rossa

The Wine Room of Cherry Hill Vineyards, trading as Coda Rossa Winery, has applied to the state Division of Alcoholic Beverage Control for permission to add a winery showroom at Grindstone Restaurant, 348 S. Main St., Williamstown, Gloucester County, according to a legal notice.

Coda Rossa is based at 1526 Dutch Mill Road, Franklinville, Gloucester County and provides its wine to several area restaurants, according to its website. The Cherry Hill Wine Room is listed as a Coda Rossa sales outlet. It offers hands-on wine making, seminars and special events from 1 Esterbrook Lane, off Springdale Road, in Cherry Hill. What's hands-on winemaking? A facility where people go to make their own wine, says the website. On Facebook: Coda Rossa. Wine Room of Cherry Hill.

Salesroom would be a short drive from 70and73 Land

DiMatteo's Vineyards and Winery of Hammonton has applied to the state Division of Alcoholic Beverage Control for permission to open a winery salesroom in Berlin, according to a legal notice.

The salesroom for the winery, which operates as DiMatteo Winery, would be at Stella Farms Inc., 459 New Freedom Road in Berlin, about a mile southwest of the Route 73 and Route 30 intersection.

Toscana, which operates an Italian restaurant in the Tuscany Marketplace at 1990 Route 70 East in Cherry Hill, wants to secure an alcoholic beverage permit, according to a Cherry Hill Township legal notice.

The Marketplace is next to the Jaguar dealer and across 70 from the Old Orchard neighborhood.

"We are a family owned restaurant that prides itself on making delicious Italian cuisine. Our recipes are a mix of traditional Italian fare mixed with some of the latest trends that are making their way through Italy," Toscana's website notes.

Toscana of Cherry Hill LLC, and owner Mario Longo, applied to take over the license for the retail sale of alcoholic beverages from Bluewater Grille LLC, trading as Chili's Grill & Bar/Blue 20, according to the township. The permit for sale was used by the long-closed and now razed Chili's at the corner of Route 70 and Haddonfield Road in Cherry Hill.