Skip to main content
You have permission to edit this article.
Edit
Home
Our Articles
Your Articles
Get Out
Dine
Shout-Out
Sponsors
Business Cards
Classifieds
Share This
1 of 8 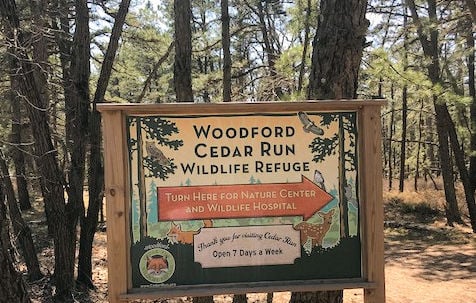 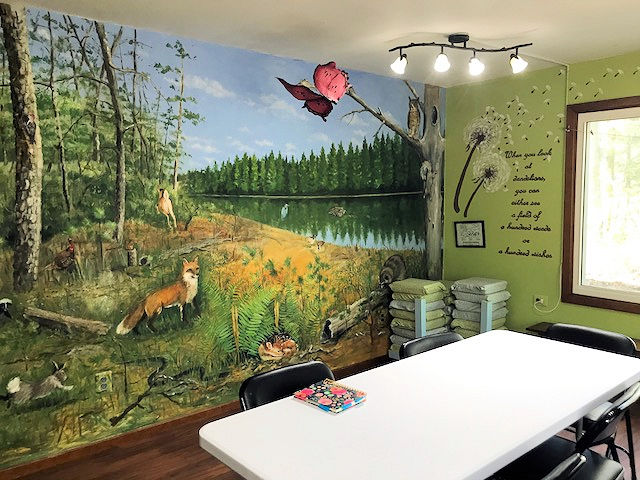 A classroom/meeting room is adorned with a beautiful mural created by a volunteer. 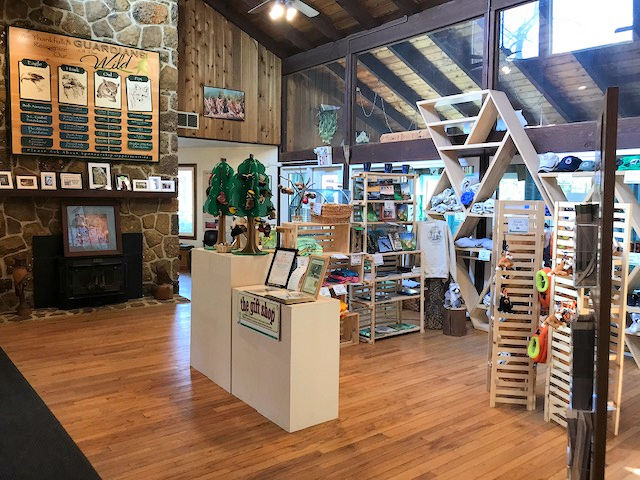 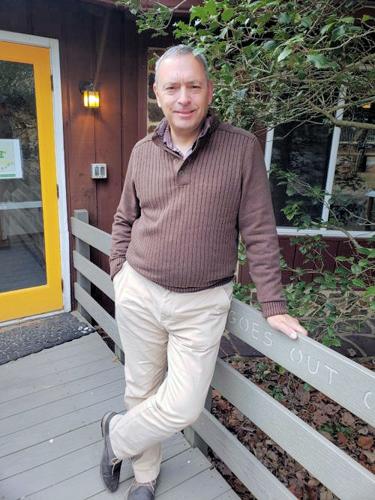 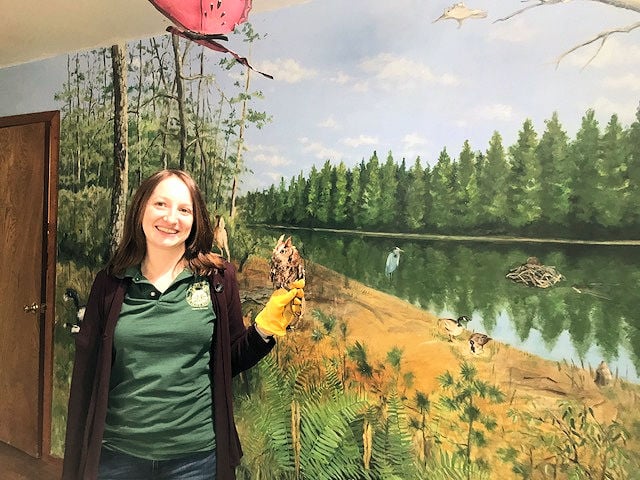 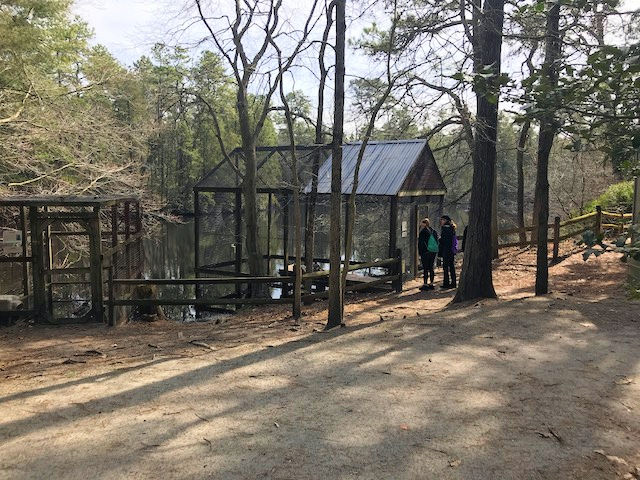 Visitors can take a tour of the area at the refuge where the permanent furry and feathered residents live. 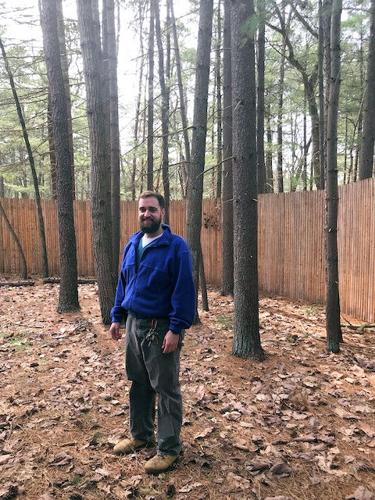 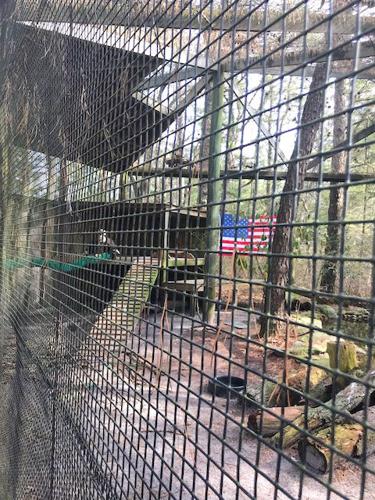 A bald eagle named Orion, one of Woodford’s permanent residents, in an enclosure adorned, appropriately, with an American flag.

A classroom/meeting room is adorned with a beautiful mural created by a volunteer.

Visitors can take a tour of the area at the refuge where the permanent furry and feathered residents live.

A bald eagle named Orion, one of Woodford’s permanent residents, in an enclosure adorned, appropriately, with an American flag.

When he took over the helm at Woodford Cedar Run Wildlife Refuge as executive director in January, Dennis Miranda couldn’t have foreseen that he would soon be fighting for the very existence of the nature center and rehabilitation hospital that has been a much-loved treasure in Medford since the 1950s.

And yet these days, because of the coronavirus pandemic, fighting to keep the 171-acre preserve afloat is what he spends the majority of his time doing. In recent weeks, he’s reached out to board members, donors, volunteers and the general public with an urgent message: If enough funds can’t be raised, the nonprofit refuge could be forced to close its doors.

Typically, 10,000 people a year visit the refuge off of Sawmill Road — it’s the only wildlife rehabilitation center in South Jersey.

Last year, more than 5,000 injured wild animals native to the area were admitted to the rehabilitation hospital. Most are treated and then returned to the wild once they’ve recuperated. More than 60 mammals, birds and reptiles are permanent residents of the refuge, living out the remainder of their lives in custom-built enclosures because of the nature of their injuries.

The coronavirus crisis hit at Cedar Run’s busiest and most expensive time of year: when animals in the wild are having babies. Miranda called the loss of income at this critical time "catastrophic."

While Miranda and his staff’s public outreach has helped raise more than $30,000 in recent weeks, it’s only enough to keep the refuge going for the next few months. He’s hanging his hopes on convincing Medford Township officials to step in and help, through its open space tax fund. At this point, the prospect doesn’t look very promising.

"Every year, Medford collects three cents for every $100 in real estate valuation for open space," Miranda explained. "Right now, the township has more than $3 million dollars in the open space fund. They’re claiming that money can’t be set aside for us, but I beg to differ."

Miranda said he approached the township and asked if $100,000 of the fund could be used to help Woodford Cedar Run Wildlife Refuge stay the course during the coronavirus crisis. He was told that it wasn’t possible.

Mayor Chuck Watson released a statement defending the township’s decision. He said Medford has annual obligations of more than $1.1 million from the open space tax fund. Those obligations, he explained, "consist mainly of debt service related to prior open space acquisitions."

Watson acknowledged that there is $3.3 million currently in the fund’s reserve, but that money, he pointed out, is needed to "bridge the gap between the open space tax collected and the obligations to be paid from the fund each year." Dipping into the reserve, he said, would mean the township would have to raise taxes to meet its annual obligations.

Watson added that part of the reserve is "allocated to other open space needs that will have long-term positive impacts on Medford as well as maintenance of our existing recreation facilities and parks."

"There is a bigger picture that must be considered when deciding to expend open space funds," Watson continued. "It isn’t always about numbers on a financial statement or the balance in an account."

Watson said the township consulted with its solicitor and was told that funds from the open space account could be used only ""to acquire or maintain property that the township will own or has a right to acquire."

The state’s Department of Environmental Protection purchased the rights to the Cedar Run property in 1997 for $900,492 via a Deed of Conservation Restriction, Watson said, explaining that because of the agreement, the property must be "maintained in a natural state and can only be used for conservation and recreation purposes, including the wildlife refuge."

"Since the rights to the property have already been acquired by the state of New Jersey, the township cannot use open space funds to acquire property by either purchase or acquiring the rights to the property by deed restriction," Watson stated. "Furthermore, open space funds are not permitted to be donated to a third party nor can the funds be used for operating expenses of a third party.

But Miranda is not convinced, and he points to other parts of the state — in Bergen County specifically — that are able to use open space funds to support nonprofits.

"Our goal is to continue to message that we need the township’s help," Miranda said. "Everyone who lives in Medford is paying into the open space fund. We’re in a crisis. Why can’t this help happen now?"

Woodford’s wildlife hospital will continue to accept injured and orphaned native wildlife during the coronavirus crisis. Since face-to-face meetings are currently not possible, finders are urged to use the 24/7 drop-off area on the front of the wildlife hospital at 4 Sawmill Road in Medford. PLEASE CALL (856) 983-3329 ext. 107 so that hospital workers can provide assistance and be prepared for new intakes. In the 24/7 drop-off area, instructions, clean linens, heating pads and intake paperwork are provided. Staff members will check in regularly for new drop offs.