A depiction of what the Catalyst Experiential monument sign would look like near the intersection of Routes 73 and 70. Route 73 is to the right and Route 70 is in the background. 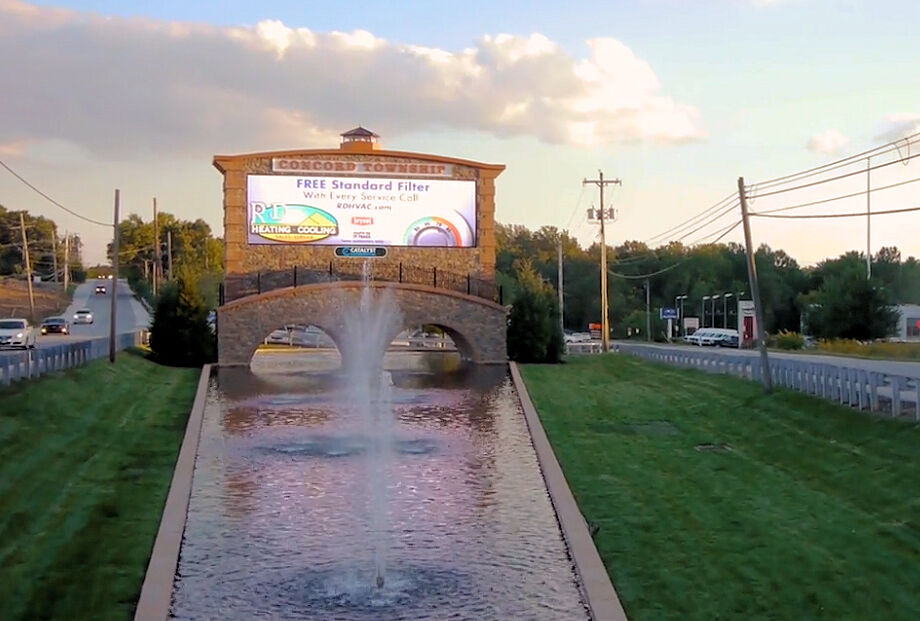 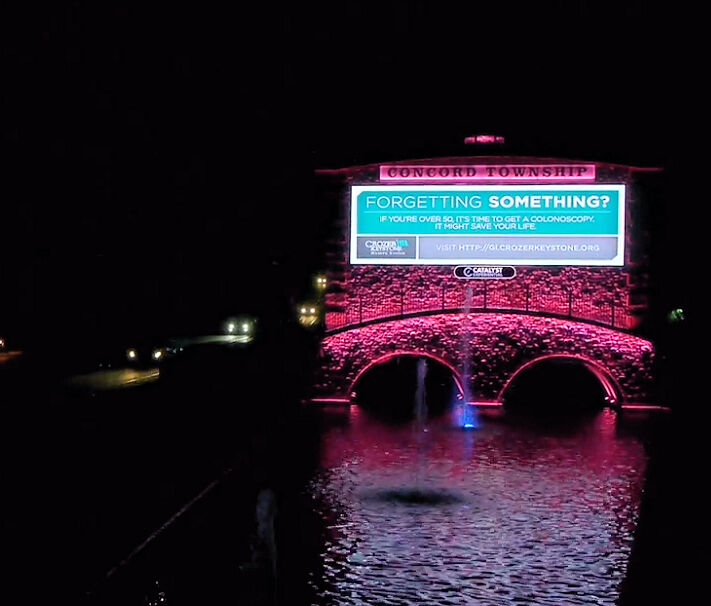 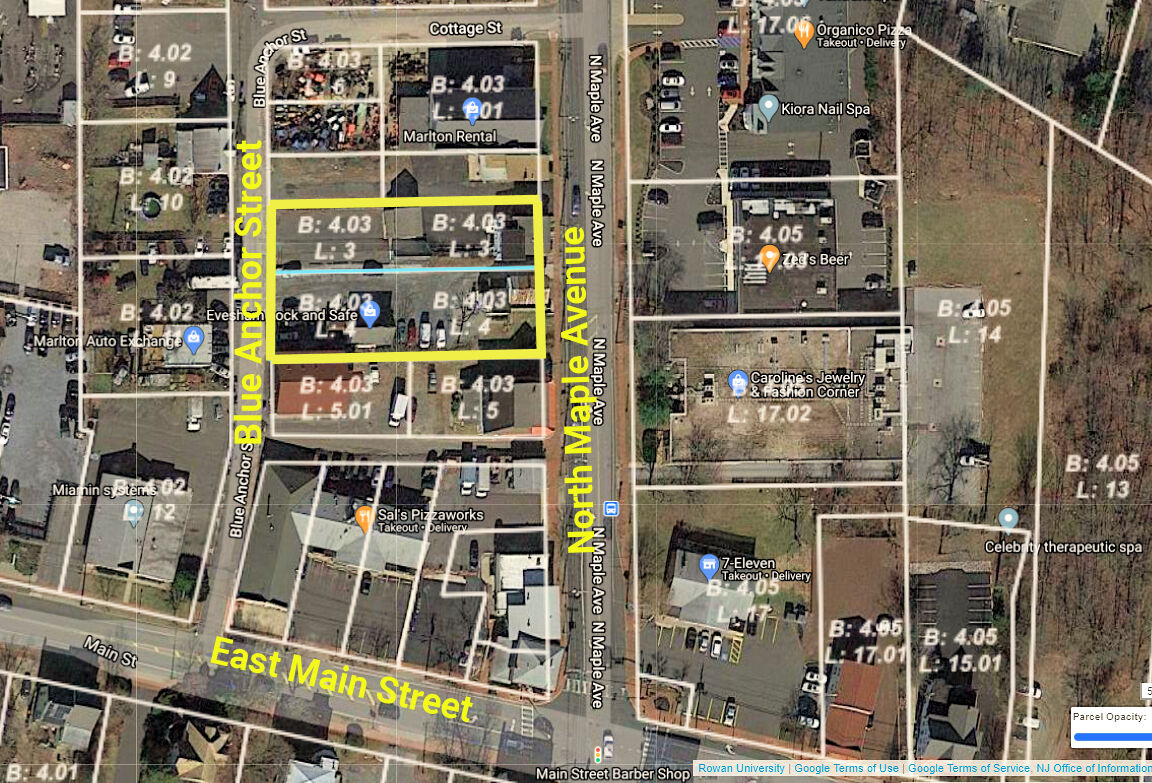 The parking lot would be in the yellow rectangle. Zed's Beer is across North Maple Avenue from the site and 7-Eleven is at the intersection. 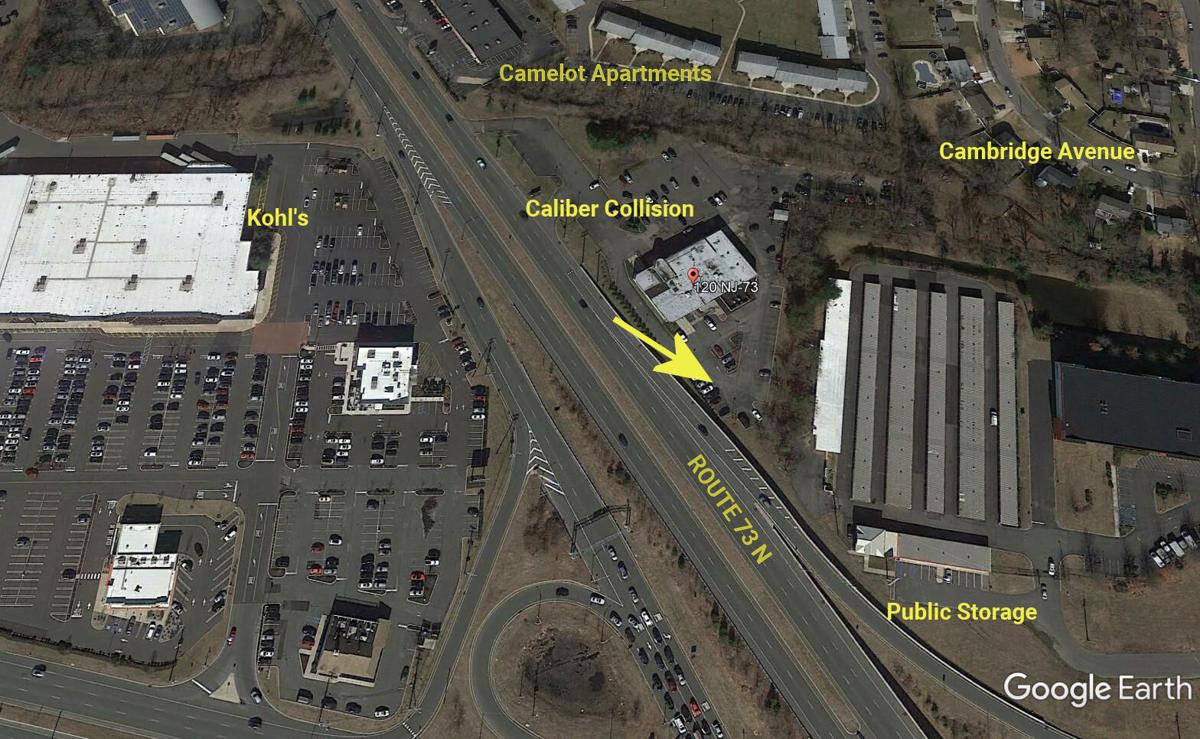 A Pennsylvania company will go before the Evesham Zoning Board of Adjustment on Monday night with plans for two giant LED signs on a 58-foot-high brick monument near the intersection of Routes 73 and 70.

The sign monument, which would be 47 feet wide, would go on a corner of the four-acre Caliber Collision property on Route 73. The Evesham Township name would be on top of the monument in three-foot-high letters, while the LED signs would be 17 feet high, according to the application from Catalyst Experiential LLC of Newtown Square, Pennsylvania.

The meeting begins at 7 p.m.

Catalyst on Friday withdrew its earlier application to build another monument sign on the site of the Gulf gasoline station at the  "Y' in the road, where South Maple Avenue splits to the right and Route 73 northbound continues to the left, according to the zoning board's agenda.

The company has built monument signs in several communities in New Jersey and Pennsylvania and, at the same time, offered the municipalities different types of local improvements. For example, Catalyst now is constructing an EMS headquarters on Route 73 in Mount Laurel that will be turned over to the township. Catalyst will have LED signs on that building.

In Evesham, a Catalyst zoning proposal accompanying the sign monument plan would create a 39-space paid parking lot behind 12 and 14 North Maple Avenue, two properties that Catalyst plans to purchase in the downtown Marlton section. Each space would be numbered and an automated station would take payment, according to the plan.

A new parking lot would be in line with the "Evesham Township Downtown Vision Plan," which was endorsed last week by the Planning Board. The 60-page vision statement says increased public parking is essential to sparking development and supporting events in the downtown area.

The two buildings — one of them is the historic 129-year-old Franklin Hendrickson House — would be vacated if the parking lot project is approved, according to the proposal. The township in the future would lease the two buildings from Catalyst, the proposal notes.

Evesham zoning agenda and how to attend meeting

Additional detail on who sets the parking rates and collects the fees is expected to come out in testimony Monday night. The site plan shows an entrance, but no exit, from North Maple Avenue and entrances and exits on Blue Anchor Street.

Township can use LED signs for messaging

Plans for the LED signs say the township will have a promotional message on each sign every two minutes.

Every message on the sign would appear for eight seconds before changing. If local organizations want to promote events, they would apply to the township to use its allocated space. The remaining messages on the sign will be from local, regional or national advertisers.

The signs would operate from 8 a.m. to midnight and would not be animated with flashing, movement or video, according to the plan. Some townships have said they fear animated LED signs distract drivers.