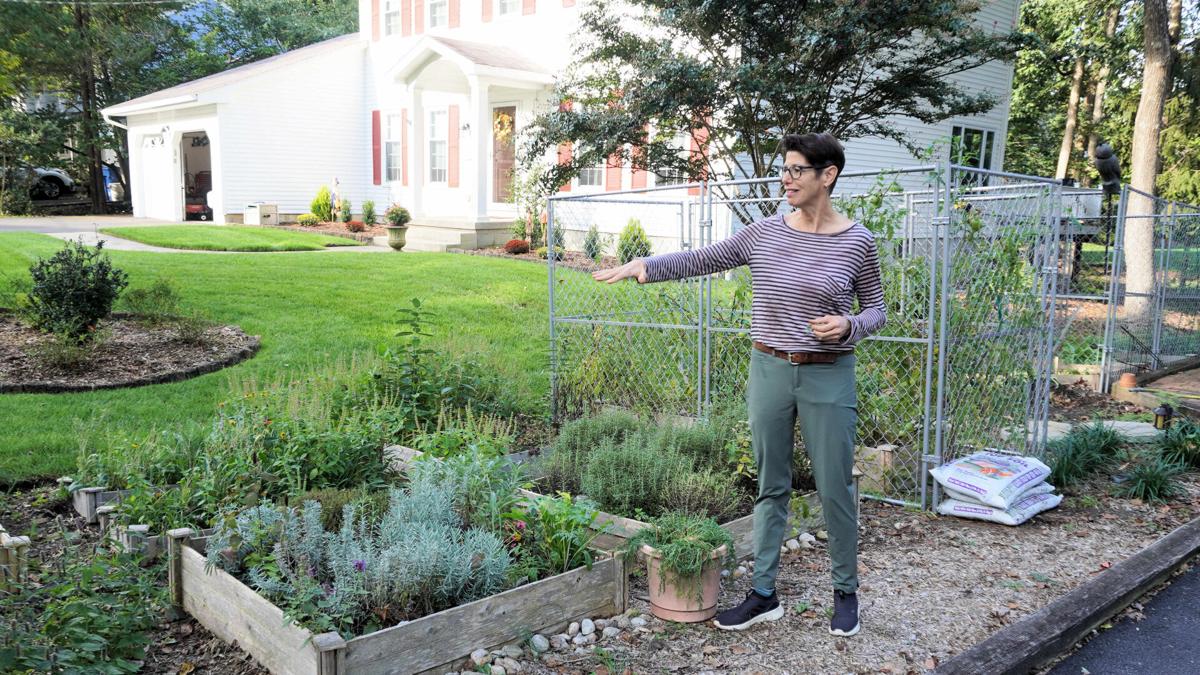 Barbara Patrizzi describes her herb garden in the front yard of her Swallow Drive home in Cherry Hill. (Click the arrows to go through the slide show.) 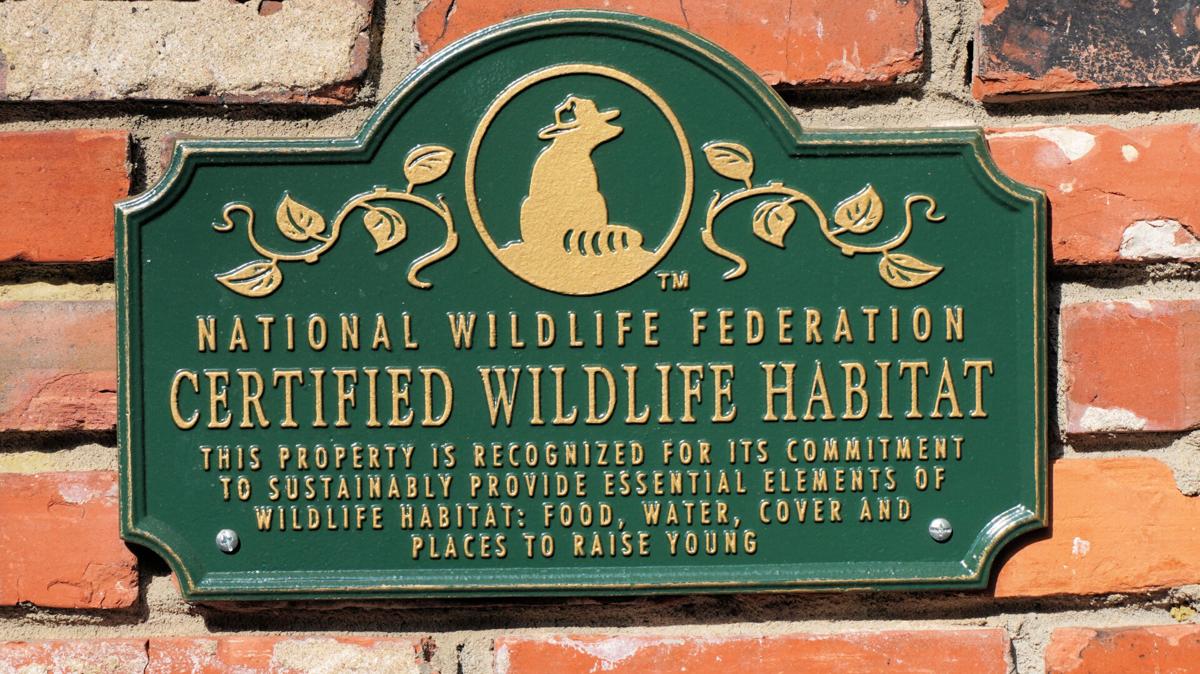 A plaque marking Barbara Patrizzi's property as a National Wildlife Federation Certified Wildlife Habitat hangs next to the front door. 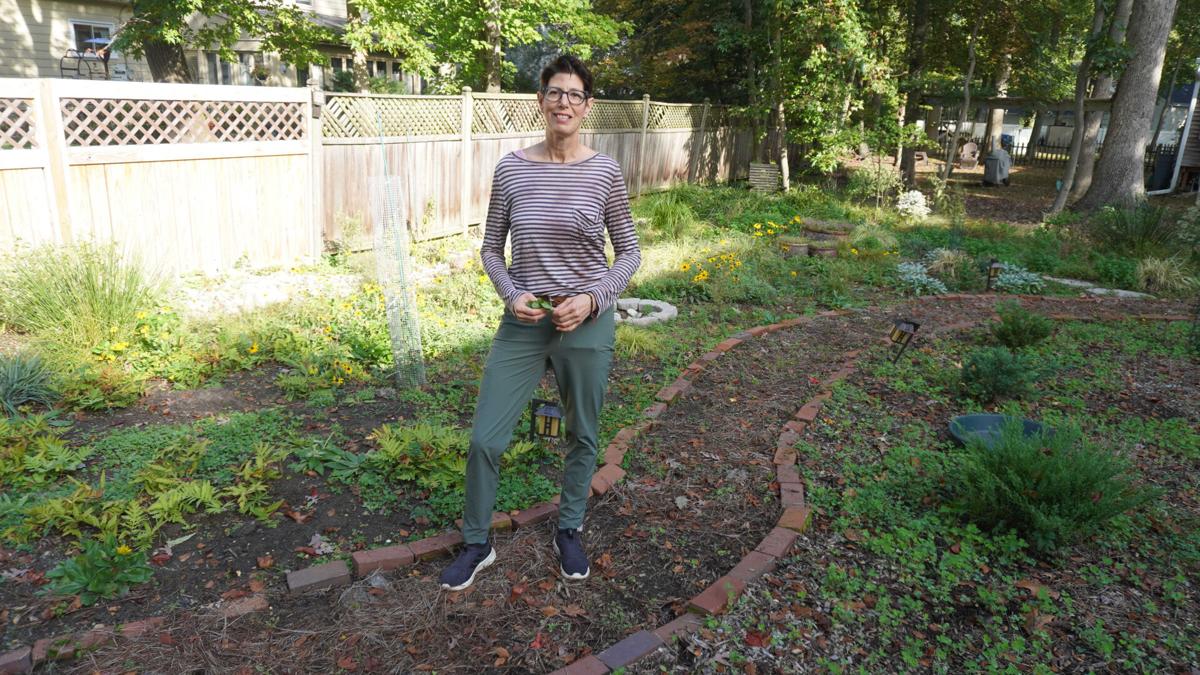 Barbara Patrizzi in her backyard garden. 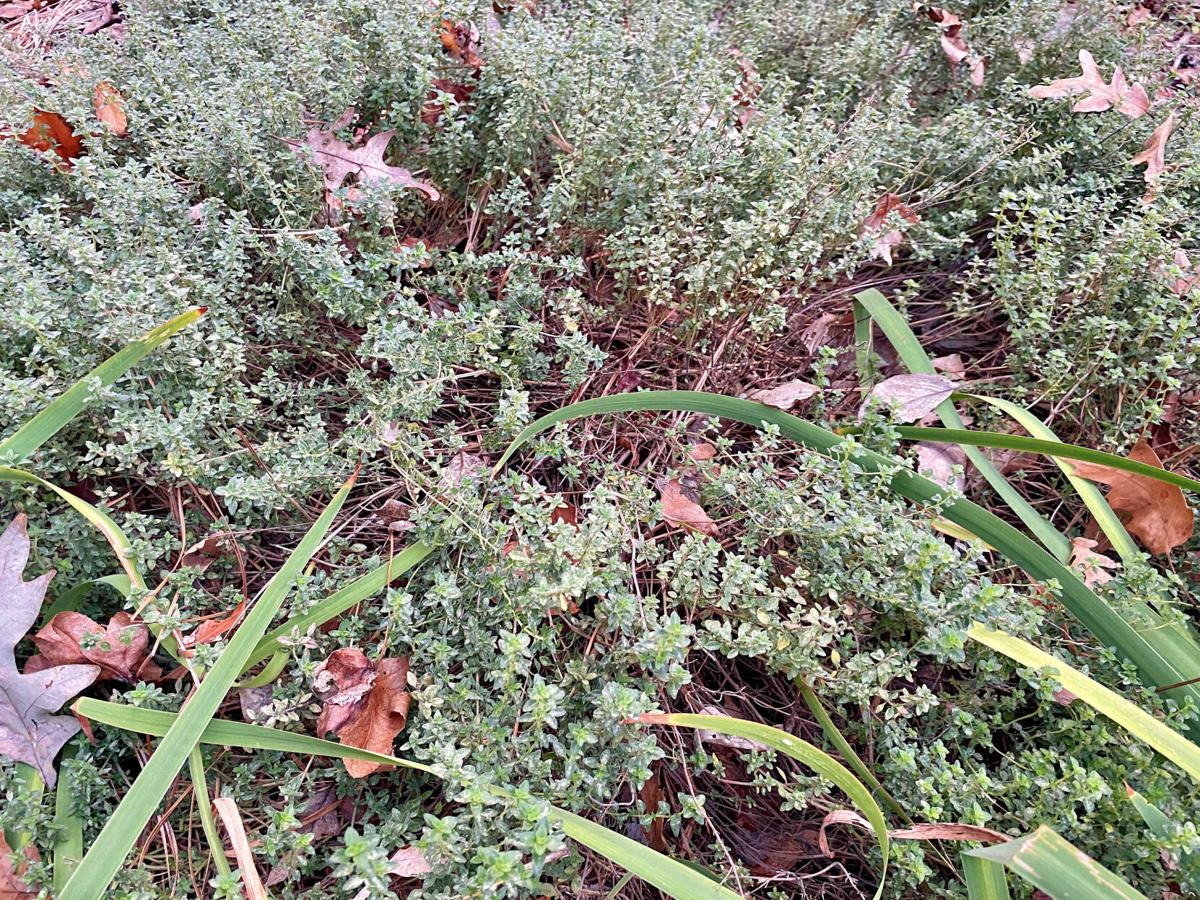 Barbara Patrizzi started creeping thyme as a ground cover for her front yard. The aromatic herb can be used in cooking and infused in water. 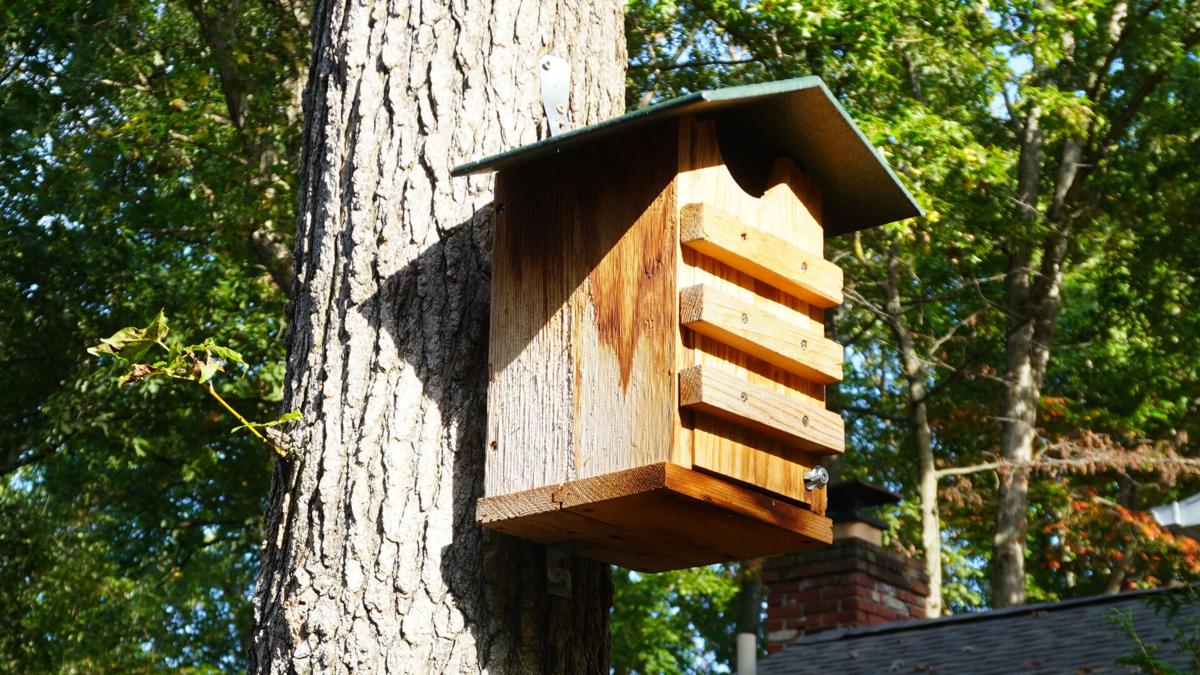 This would be home to a screech owl, but a tenant has yet to show. However a family of squirrels did claim squatters' rights for a while.

Barbara Patrizzi describes her herb garden in the front yard of her Swallow Drive home in Cherry Hill. (Click the arrows to go through the slide show.)

A plaque marking Barbara Patrizzi's property as a National Wildlife Federation Certified Wildlife Habitat hangs next to the front door.

Barbara Patrizzi in her backyard garden.

Barbara Patrizzi started creeping thyme as a ground cover for her front yard. The aromatic herb can be used in cooking and infused in water.

This would be home to a screech owl, but a tenant has yet to show. However a family of squirrels did claim squatters' rights for a while.

Bending over, Barbara Patrizzi deftly uses her fingers to snip anise herb from her garden, bringing it to her nose to sample the aroma before handing it to her visitor to smell.

This patch of herbs in the front yard of her Swallow Drive home in Cherry Hill also yields rosemary, lemon balm and other plants that Patrizzi uses in cooking, brewing tea and infusing in water. The edible herbs share their space with milkweed — toxic to humans, but essential to the survival of monarch butterflies, which lay their eggs on the underside of the leaves.

Those monarchs are important, albeit migrating, guests, but they are not the only visitors to this garden. Patrizzi has designed her property to be a welcoming feeding ground and potential home to a variety of wildlife — from songbirds to screech owls and also chipmunks, squirrels, skunks, opossums, bats, foxes and the pair of mallard ducks that visit her twice daily for a month each year and then move on.

You cannot forget the deer, but Patrizzi frequently would like to because of their voracious appetites for her plantings.

"They allow me to live here," Patrizzi said of the ubiquitous deer during a 70and73.com interview on Friday.

And, Cherry Hill Township announced last week, the community's enthusiasm has resulted in the town being officially certified in the Community Wildlife Habitat program. Only four other communities in New Jersey hold the distinction: Cape May, Lambertville, High Bridge and Montclair.

"This momentous achievement would not have been possible without the volunteer members of our Cherry Hill Environmental Board, as well as hundreds of dedicated residents who took time out of their busy lives to ensure that we are united in our commitment to protecting and enhancing our natural wildlife habitats,” Mayor Susan Shin Angulo said in a statement.

Patrizzi, a member of the Environmental Board, and others were honored with a proclamation at last Tuesday's Township Council meeting. Special credit went to business owner Lisa Herman, who sponsored the initial registration fee. Her Wild Birds Unlimited store is on Kings Highway across from the Ellisburg Shopping Center.

» MORE: How to certify your property.

Why is it important to have a community certified for its wildlife habitats? "It shows us to be a leader in wildlife habitat restoration," explained Patrizzi, who said applicants for certification need to show how their property provides food, shelter and water for wildlife.

And there are tangibles, she said, including a reduction in chemical use and water consumption as lawns disappear, better crop yields on farms and in gardens because pollinators are attracted, and an increase in songbirds and mammals that eat mosquitoes, ticks and other nuisance insects.

On Friday, Patrizzi greeted 70and73.com on her driveway and, with a wave of her hand toward the array of plants and ground cover in her front yard, noted: "No lawn." The less lawn the better, she said of her ideal residential property.

Her goal is to focus on species native to New Jersey and also ones that "mimic nature" and do not need special attention during hot, dry summers.

Yet, native plants are not a requirement for the habitat certification.

"Any plant is better than no plant for wildlife," Patrizzi said.

Patrizzi, now retired, grew up in her parents' Swallow Drive home and graduated from Cherry Hill High School East. She attended the Philadelphia College of Art (now the University of the Arts). She also studied at Thomas Jefferson University for a career as a cytotechnologist, living in the West Mount Airy section of Philadelphia — she had a "postage-stamp-sized" garden — and working at Quest Diagnostics.

When her parents, Joseph and Jackie Patrizzi, grew older and in need of care about three years ago, Patrizzi moved back to the Eagle Oak neighborhood off Springdale Road where her parents were original owners in 1968. Her parents have since died, but Patrizzi has made her childhood home her home and the property a wildlife habitat.

She attributes her interest in the environment and ecology to her grandfather, a self-taught naturalist who shared his knowledge with his grandchildren on hikes and other excursions.

Besides serving on the Environmental Board, Patrizzi also volunteers at the Woodford Cedar Run Wildlife Refuge in Medford and the Voorhees Animal Orphanage. She also is involved with New Jersey Independent Voters, an organization that wants more of a voice for unaffiliated voters.

Patrizzi said her most-frequent guests are the Carolina wrens that nest in her front yard and the catbirds, who she says seem to have an interest in people and follow her as she gardens.

Her greatest habitat disappointments were the two mature oak trees that had to be removed after they became diseased and died.

However, she showed off a hybrid American chestnut tree seedling, wrapped in its own fence to keep away deer. It is a hardier-than-normal chestnut tree that she hopes will grow to maturity. In the early 1900s, an estimated four billion chestnut trees died from a blight fungus that "has been called the greatest ecological disaster to strike the world’s forests in all of history," according to the American Chestnut Foundation.

Patrizzi also is planting pawpaw trees, a native whose fruit has been described as a mixture of banana and mango, and creeping thyme for ground cover, an herb that can be eaten. Her yard also has aster plants, likely thanks to birds rather than her efforts (they "just volunteered to come up") and a section of lilly of the valley, also not planted by her but kept in memory of her mother, who did plant them.

"I view gardening as a big experiment," she said.